I recently wrote a trip report about my experience between Belgrade and Istanbul on Turkish Airlines. I decided to write a report about the return journey because I guessed people might be interested in the airline’s relatively new narrow body business class cabin, which, by chance, was on this flight. As far as I’m aware, these new cabins are available on the A321neos and the Boeing 737 MAXs but from what I’ve read they will be rolled out onto other narrow body aircraft as well. My flight was operated by the A321neo. I won’t write a long report because my flight was similar to the outbound in terms of service. I should note that this flight was operated just a few days before the major snowstorm in Istanbul which shut down the airport, led to the cancellation of almost 2.000 flights and, I assume, many unhappy customers.

Just for reference, flying business class on a short one-and-a-half-hour flight isn’t really necessary but Turkish Airlines offers really cheap upgrade options. While I paid for the upgrade on my Belgrade to Istanbul flight, I used my expiring miles to upgrade here. The good thing is that you get to use the lounge in Istanbul, and you will be off the plane first.

Istanbul Airport was rather crowded when I got there and I went to the Turkish Airlines lounge, which is above the airport’s main hall. The lounge is huge with a lot of sitting areas, and there are power ports everywhere which is appreciated if you have to do some work. The food offering is ok. There is a buffet style spread with some “bites”, so to speak, which are actually served on Turkish Airlines flights. There are also a few stations with cooks where they make food like spaghetti, Turkish pide and simit. As for drinks, there are fridges with soft drinks, water and alcohol available. There is also a juice station where the same juices offered as welcome drinks on Turkish Airlines flights in business class are served. I found it funny when I saw an older gentleman open his carryon suitcase and stuff it with coke cans and water bottles. Crazy the lengths some people will go to. 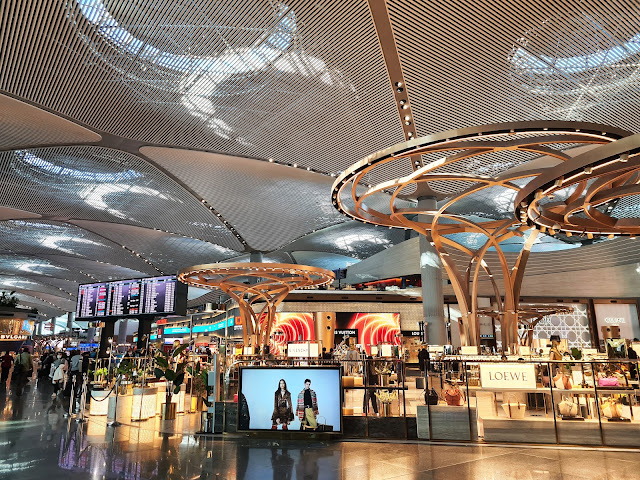 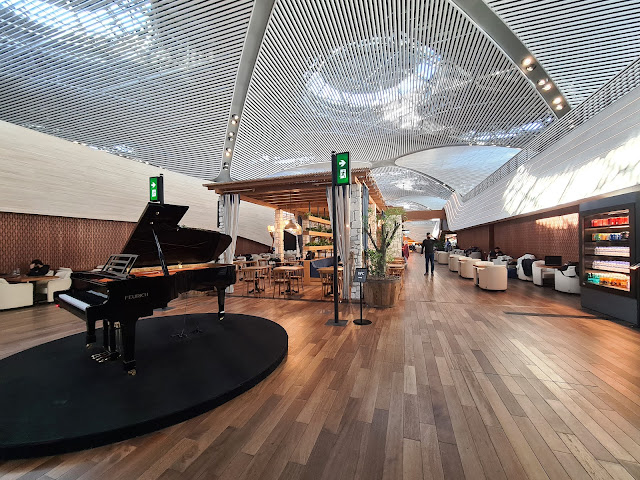 I headed to the gate when it was approaching boarding time. Allow a lot of time as the distances at Istanbul Airport are rather long. All document checks for entering Serbia were done again at the boarding gate. I was glad to see that we would actually be boarding via an airbridge and not bussed to the plane. A queue had already formed some good 15 minutes before boarding actually started and everyone just rushed onto the plane despite families with children and business class passengers being invited first.

The new cabins look very fresh. The configuration is 2×2 although the seats look much smarter and lighter. Compared to the other ones they are a bit firmer, and I found the older seats to be a bit more home-like (sofa style). However, the width of the seat is the same and it is more sophisticated with a remote control and better recline options. Also, you actually have a small divider which you can pull out, which is located just right (or left depending on where you are sitting) of your headrest. This is a nice feature if you are flying alone and someone else is seated next to you. The screens are also very responsive and have a more substantial entertainment offering than on the older planes. Wi-Fi is also available on board and it is free for business class passengers. You just type in your surname and seat number on the welcome screen, and you are connected. Speed ​​was good.

The plane was 100% full including business class. After taking my seat another passenger asked if I could move so his entire family could sit in the same row which was fine. Crew was nice and served us the welcome drinks, distributed the menus (which are of an informative nature as there is no food selection), headphones were given out and passengers were also offered a hot towel before takeoff. 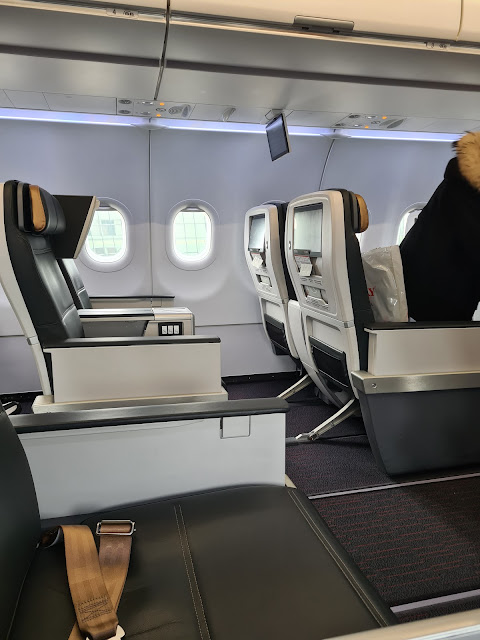 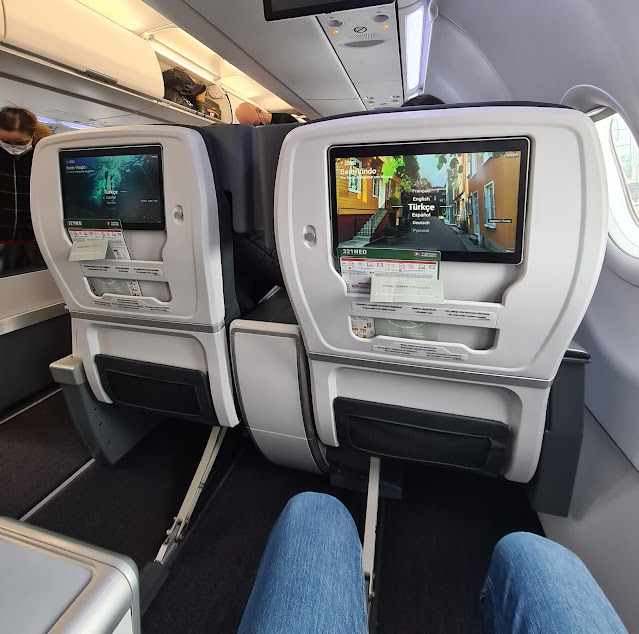 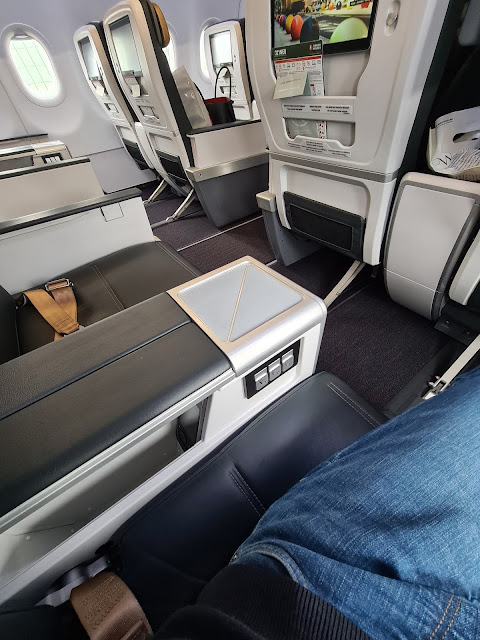 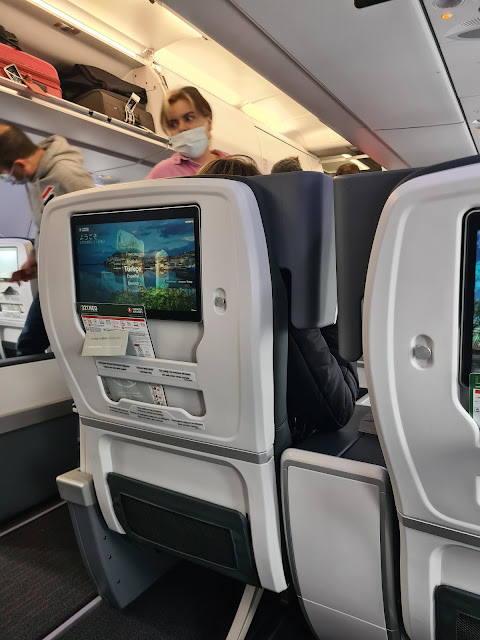 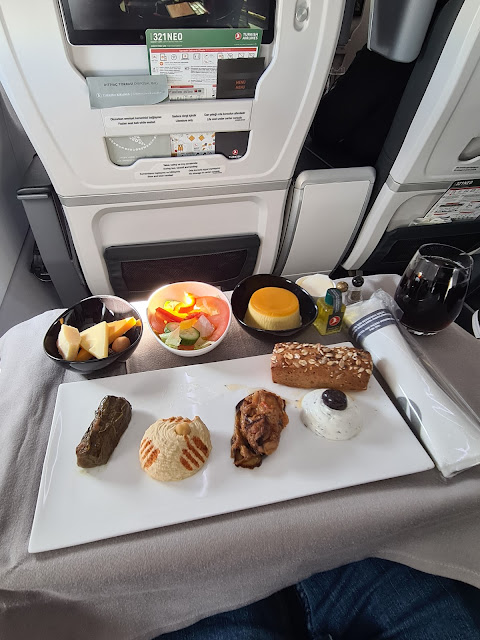 The rest of the flight was similar to the outbound journey, so I won’t go into detail. Overall, it was a good flight. Like I said, if you are offered an upgrade option, I think it is generally a good deal and worth it if you would like to experience business class. However, do note that some Turkish Airlines planes also have European style business class (economy class seat with middle blocked) and I know they deploy them on flights to ex-Yu countries from time to time so it’s a bit of a gamble.

I also have to mention that I was impressed by Belgrade Airport on this occasion. As I was one of the first to leave the plane passport control was quick. It was less than 5 minutes from leaving the plane to arriving at the baggage carousel. To my big surprise, bags were already rolling out and they have added the status of the luggage delivery on the overhead screens, so you know if the bags are on their way or are just being offloaded from the plane etc.

Share your travel experience by submitting a trip report to exyu@exyuaviation.com