Aircraft flying into Israel from the Mediterranean Sea are again experiencing navigation problems due to a signal-spoofing system installed by Russia in Syria, Kan News reported Monday.

According to the report, pilots started having problems a few weeks ago, and Israel has sent a message to Moscow saying the system is disrupting its civilian airspace.

However, Russia has reportedly rejected the Israeli request, stressing that the system is necessary to protect its soldiers stationed in Syria.

The interference with aircraft GPS reception appears to stem from a form of electronic warfare known as “spoofing,” which Russia has historically been accused of as a defensive measure, despite the disruptions it causes to nearby planes and ships. .

The report said Israel was working to “neutralize” the outage, without elaborating further.

According to Kan, the problem is related to a signal jammer installed at Hmeimim Air Force Base in Latakia, near the site of a number of alleged Israeli airstrikes recently. However, officials believe the outage is aimed at other targets, with Israel as collateral damage.

A pilot told the broadcaster that the spoofing has caused pilots to react suddenly, such as when an aircraft’s GPS guidance system tells it to be in a different place than it is, or to suddenly take off immediately.

“What we ran into is [electromagnetic] spectrum interference from the east, which took us a while to understand,” said the pilot.

Even before the report of the outage, some amateur radar operators noticed strange behavior from planes approaching Israel.

Is this a tracking glitch on different apps for multiple flights? A malfunction at a feeder? or something is blocking gps/reported positions? Wx related? pic.twitter.com/lEnukimexJ

In 2019, Israeli civil air authorities publicly complained that similar Russian interference had a “significant impact on all aspects of operating an aircraft from the cockpit, as well as air traffic management.”

Russia dismissed the allegations as fake news, but the issue was addressed until recently.

This time, there has been no official confirmation or complaint about the interference.

The pilot accused officials of knowing about the problem but “burying their heads in the sand” rather than issuing an official complaint.

“The IDF monitors the spectral dimension and defends and acts against threats as part of the multidimensional defense of the State of Israel,” the military told Kan in response.

The broadcaster also said some in Israel believe the outage was an attempt by Russia to show who’s boss in Syria, citing the many airstrikes there blamed on the Israeli military. 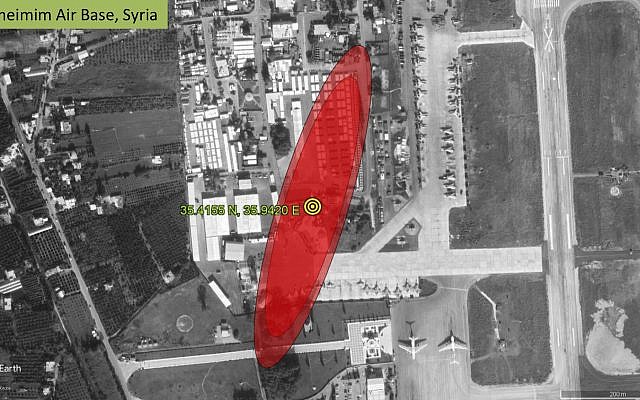 The source of a signal interfering with GPS reception for planes flying over Israel, located at Russia’s Hmeimim Air Force Base in western Syria, from a presentation by aerospace engineer Todd Humphreys to the US government in June 2019. (Courtesy)

The report comes after Syrian state television said Israel carried out attacks near Damascus early Monday. It was the first such attack since Russia last week announced it was conducting joint military jet patrols with Syrian Air Forces from airspace along Syria’s borders, including the Golan Heights area.

According to the report, Israeli officials struggled to understand why Russia, announcing that such joint patrols were expected to take place regularly, had apparently changed its policy toward Israel.

The report claimed, without citing the source, that Israel could limit its air campaign in Syria as a result of the Russian move, even after talks have ended.

Israel has carried out hundreds of strikes against targets in government-controlled Syria over the years, but rarely acknowledges or discusses specific operations. Many of the past attacks have targeted the main airport in the capital Damascus, where Iran is believed to be transferring advanced weapons to its proxies.

Israel has acknowledged targeting the bases of Iranian troops and Iran-affiliated terror groups, particularly along the Golan border, such as Hezbollah in Lebanon, which has deployed fighters in southern Syria. It also says it will target arms shipments believed to be destined for those groups.

Russia, Iran and Hezbollah are all fighting alongside the forces of Syrian President Bashar Assad in the decade-long civil war.

During a global pandemic, a small country produces research that helps guide health policy around the world. How effective are COVID-19 vaccines? Does a third dose after the first two injections help? How about a fourth?

When The Times of Israel started covering COVID-19, we had no idea that our little beat would become such a central part of the global story. Who could have known that Israel would be first at almost any point in the vaccination story — generating the research so urgently needed today?

Our team handled this story with the rigor and rigor that characterizes Times of Israel reporting on topics. If it is important to you that this type of media organization exists and thrives, I urge you to support our work. Will you join the Times of Israel Community today?

You are serious. We appreciate that!

We are very glad you read X Times of Israel articles in the past month.

That’s why we come to work every day – to provide critical readers like you with indispensable coverage of Israel and the Jewish world.

So now we have a request. Unlike other news outlets, we have not put up a paywall. But since the journalism we do is precious, we invite readers to whom The Times of Israel has become important to support our work by joining The Times of Israel Community.

For just $6 a month, you can help support our quality journalism while enjoying The Times of Israel ADVERTISING FREE, as well as access to exclusive content available only to members of the Times of Israel Community.