Airlines and airports have been united in the face of adversity. The bosses of British Airways, Virgin Atlantic and Heathrow posed for photoshoots on an empty runway, held joint press conferences and met ministers together as they pushed to loosen travel restrictions and encourage people back into the skies.

But now, the solidarity is over, with pandemic disruption dragging into a third year and aviation losses forecast to soar into the hundreds of billions of dollars.

“A bleeding airport is music to my ears,” said Willie Walsh, the former head of British Airways who now runs the International Air Transport Association, the trade group of airlines, and is leading a campaign against higher airport charges.

Although Walsh qualified his remarks by admitting some concern for struggling smaller airports, he added: “But for most of these big quasi-monopoly or monopoly airports, I don’t have sympathy.”

Airlines, which typically pass landing charges straight on to passengers through ticket prices, desperately want lower fees to encourage people back into the skies through discounted fares as the financial strain on their balance sheets mounts.

Iata has forecast the world’s airlines will lose another $11bn this year, taking overall net losses since 2020 to more than $200bn. The airlines argue that airport owners, often deep-pocketed long-term infrastructure investors, should be forced to share the pain.

But many airports are instead pushing to raise their fees to help cover pandemic losses and invest in infrastructure.

Airport bosses argue their businesses are constrained by strict regulations that control their pricing structures, meaning they cannot flex their prices up and down like airlines.

They also have particularly high fixed costs, including providing security and emergency services regardless of how many people are flying.

“It’s a perennial hot potato, but the pressure has increased because of the pandemic. Both sides have taken a lot of pain,” said John Strickland, director of JLS, an aviation consultancy.

The biggest flashpoint over fees has come at London’s Heathrow, which lost its crown as Europe’s busiest airport during the pandemic and wants regulators to let it raise landing charges by as much as 90 per cent over the next five years.

That request, and a separate bid to claw back £2bn in pandemic losses through higher charges, was rejected. Instead, the UK’s Civil Aviation Authority gave the airport permission to raise landing fees by 37 per cent to £30.19 per passenger for an interim period from the start of this year, while a longer-term deal is reached. 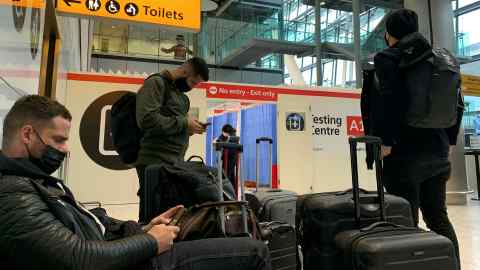 This has provoked fury from the big airlines that use the airport, including BA and Virgin Atlantic, two businesses nursing billions of dollars in pandemic losses between them.

While Heathrow and airlines used to hold crisis meetings to discuss how to lobby the government around travel restrictions, airlines have instead started to meet to “war game” how to battle Heathrow, according to a person familiar with the discussions.

There is an expectation among some within the industry that the matter could end up in court, one person said.

However, Chris Annetts, Heathrow’s director of strategy, downplayed the tensions, and said debates about airport charges “come and go, generating a lot of heated commentary along the way”.

“Airports and airlines work more closely together than commercial partners in most other industries,” he said.

Other airports have also floated plans to increase charges, including Amsterdam Airport Schiphol, which is pushing for a 37 per cent rise, as well as South African and Canadian airports, according to Iata.

One executive at a major European airport investor said that after two years, investors were beginning to chafe at having to bear significant losses in regulated industries that were designed at privatization to offer low-return but low-risk investments.

Olivier Jankovec, director-general of ACI Europe, the airport trade body, believes that airlines have yet to accept a decades-old shift in the aviation industry, with half of Europe’s airports privatized and facing their own commercial considerations.

“Airports have their own shareholders to remunerate and are no longer recipients of massive public funding. There has been a fundamental transformation and change that Iata has not come close to accepting and recognizing . . . they want it to go back to their good old days when airports were used as instruments of subsidization for airlines,” he said.

But while some hub airports have been confident enough to raise fees during the crisis, the dynamic is reversed for smaller airports with less bargaining power.

They have come under relentless pressure from airlines, which have used the crisis to redraw their networks, and have insisted many smaller airports cut their fees, sometimes to zero, if they want any business.

These airports then have to rely on other revenue streams, including retail, food and drink, and car parking to survive. Others receive government subsidy and are treated as loss leaders to encourage tourism or economic development.

Ryanair, Europe’s biggest airline, this month announced it would close its base at Frankfurt and move five aircraft to airports that had agreed to lower their charges to stimulate demand.

Another airport that has chosen to work with airlines on landing charges is London City Airport, which is popular with business travelers given its proximity to central London.

“In some areas, you can see relationships coming under strain. That is certainly something that we have sought to avoid,” said Robert Sinclair, London City’s chief executive.

Gatwick, another airport with limited leverage given how many airlines have suspended operations there during the pandemic, has said its landing charges will rise along with inflation.

Ultimately, some industry executives believe the pandemic has undercut the regulatory system in place at busy airports such as Heathrow, where costs are divided per passenger.

But few expect the industry to be able to coalesce around a new funding model at a time of severe financial stress.