The Texas winter storm of 2022 has canceled more than 2,000 flights in and out of DFW International Airport since Wednesday, stranding passengers who are still looking for a way to get out of town.

But a canceled flight often leaves passengers in a conundrum over whether to request a refund or sit and wait for the airline to put them on the next available flight to their final destination.

Southwest Airlines suspended operations at Dallas Love Field in advance of the storm to give travelers time to rebook flights.

But if you’re one of the thousands of inconvenienced flyers, here’s what you need to ask about refunds, hotel rooms, meals and taxis if your flight gets canceled or delayed.

DFW International Airport and Dallas Love Field are effectively closed after the cold blast of rain and frozen precipitation iced runways overnight. Flights at Dallas Fort Worth International Airport are grounded Thursday morning and the FAA has closed the airport until at least 11 am because of icy runway conditions. Dallas Love Field is still open, but all three commercial carriers operating there have completely shut down operations for the entire day.

Should I cancel my flight?

Canceling your reservation and seeking a refund can be a tricky proposition for passengers who may have to gamble on taking their business elsewhere or hoping the airline can accommodate them.

“If your flight is canceled and you choose to cancel your trip as a result, you are entitled to a refund for the unused transportation – even for non-refundable tickets,” the US Department of Transportation’s air passenger refund page says. That even applies for bag fees.

Both Southwest Airlines and American Airlines have enacted travel advisories for the winter storm that let passengers rebook tickets to another nearby date free of charge. In American’s case, that applies to flights in the same cabin class.

It may seem that canceling a ticket for a refund is a better option, except that ticket prices get more expensive for same-day or next-day travel and seats on planes are in short supply with so many people being rebooked the last few days.

For instance, there are only a handful of flights left on Southwest Airlines for flights from Dallas Love Field to Los Angeles International Airport, and all are selling for more than $300. Those tickets usually sell for about $74.

I still want a refund. Can I get one?

Federal law entitles airline passengers to a refund if a flight is canceled for any reason, even weather.

But weather and mechanical issues don’t qualify for federal refunds for delays. And when staffing issues are caused by weather delays, the delays don’t trigger automatic refunds either. The same goes for compensation for hotels, meals and transportation.

“Some problems, like bad weather, air traffic delays and mechanical issues, are hard to predict and often beyond the airlines’ control,” the website for the US Department of Transportation says.

American does provide compensation such as hotels for “cancellations or delays that were caused by controllable issues” such as maintenance problems, American Airlines spokeswoman Andrea Koos said in August. It also gives meal vouchers for non-weather-related delays of more than three hours.

Nationwide, weather has been responsible for about 29% of all delays during the past five years, accounting for roughly 256,000 hours of delays, according to the Bureau of Transportation Statistics.

Getting a refund from an airline during periods of severe weather and subsequent disruptions is difficult, Paul Hudson, executive director of passenger advocacy group FlyersRights said in August.

“The airlines always want to blame everything on the weather,” Hudson said. “If they blame it on the weather, they don’t have to be responsible for refunds or accommodations if people are stranded.”

Passengers asking for refunds may also be at the mercy of airlines and customer service call centers that are overwhelmed with winter weather requests.

Where can I find out the rules for flying?

All US airlines outline the rules for refunds, delays and cancellations, overbooking and other customer issues on their websites. These “contracts of carriage” or “conditions of carriage” should outline what happens in the event of a delay.

Fort Worth-based American Airlines’ rules say, “If you decide not to fly because your flight was delayed or canceled, we’ll refund the remaining ticket value and any optional fees.”

Dallas-based Southwest, which flies out of Dallas Love Field, has similar rules for delays, cancellations and diverted flights.

But Hudson also says that in the event of delays, passengers can try taking their tickets to another carrier, which will sometimes honor the ticket and then charge the other airline later. However, that usually doesn’t work with ultra-low-cost carriers such as Frontier and Spirit. 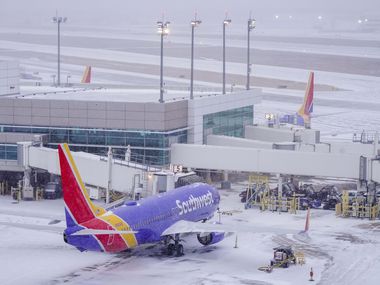 Southwest Airlines has suspended all flights in and out of Dallas Love Field on Thursday with snow and sub-freezing temperatures coming with a winter storm. Southwest Airlines, which is headquartered at Dallas Love Field, has issued travel advisories for 13 airports in Tennessee, Kentucky, Arkansas, Oklahoma, Kansas and Texas ahead of the winter storm forecasted to sweep through the region with snow, sleet and ice accumulation and temperatures into the 20s and even teens between Thursday and Saturday.