Embry-Riddle Aeronautical University has access to several simulators that allow students to be more engaged during training sessions. This is a Frasca C172S TruFlite AATD simulator. (Photo by Mary Grace Grabill/Cronkite News) 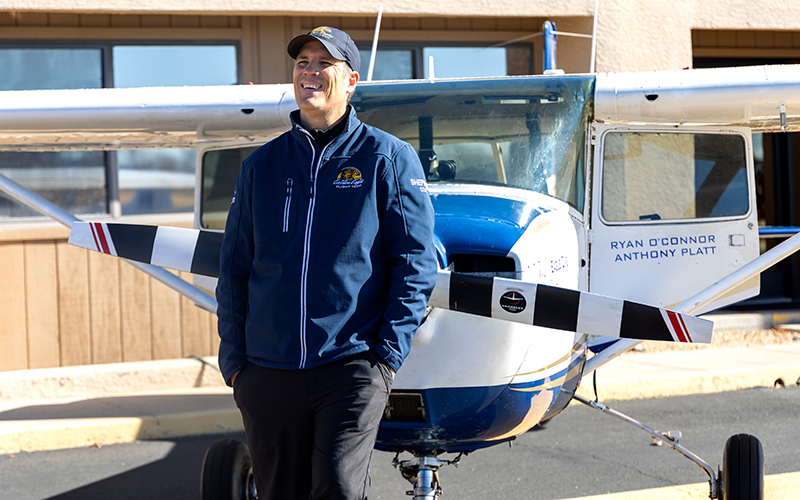 Shaun Shephard graduated from Embry-Riddle Aeronautical University in 2003 and is now the head coach of the Golden Eagles Flight Team. (Photo by Mary Grace Grabill/Cronkite News) 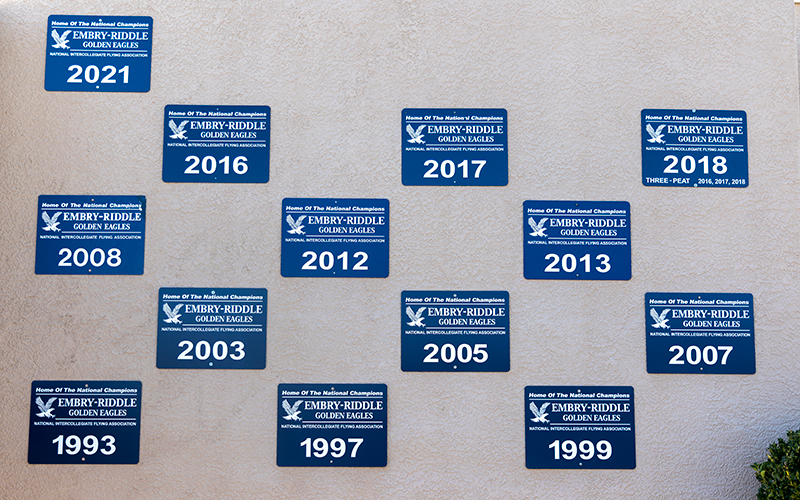 PRESCOTT – In the heart of a city nicknamed “America’s Hometown,” future pilots train under the guidance of some of the aviation industry’s top executives.

Prescott has been home to Embry-Riddle Aeronautical University, widely regarded as one of the most prestigious flight schools in the country, for more than 40 years. Yet it is more than an aviation think tank. It also has one of the best collegiate flight teams in the nation.

“One of the greatest thrills of my life,” said Shephard, who graduated from Embry-Riddle in 2003.

Every fall, dozens of students try for the flight team. Over the course of a few weeks, the field narrows. Pilots will be selected, as will those who will focus on specific ground events.

Embry-Riddle senior Douglas Niemela, who earned his spot on the team as a freshman, is now team captain. He didn’t even plan on becoming a pilot when he first came to Embry-Riddle, but now he’s an instructor pilot and “is more comfortable on an airplane than in his own truck.”

Niemela values ​​the relationships he has with those in the program, and thinks it’s worth watching younger students grow and get excited about flying. He is grateful for the unique experience the school offers. 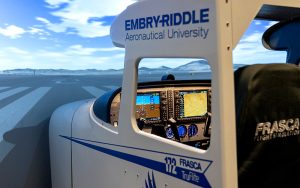 Each fall, dozens of students try for the flight team, and the field will be reduced in size over the next few weeks. Pilots will be selected, as will those who will focus on specific ground events. (Photo by Mary Grace Grabill/Cronkite News)

“I get to fly over Sedona, Arizona, and that’s my classroom,” he said. ‘That’s my homework. It’s really cool.”

Niemela was part of the team’s 2021 championship last summer and he understands what it takes to build a program as successful as Embry-Riddle’s. He compared it to Alabama’s title runs in football. Shephard compared it to Duke basketball.

For younger students like Eric Tran, Niemela has set the standard for the incoming students on the team. However, their kindness and sincerity also show Tran that the team is truly a family.

“You have a bunch of caring team members who work very hard, they are very smart and they are willing to help you in any way they can,” Tran said. “It’s another home away from home.”

Support is welcome at this academically challenging private school.

Over the course of four years, students participate in a four-year program accredited by the Federal Aviation Administration. With the hours required and the certificates awarded over the course of the four years, some at Embry-Riddle refer to themselves as the “Harvard of the Skies.” Students achieve the highest possible level of certification in aviation.

They start on the ground, develop flight plans and go to ground school before progressing to advanced simulator training. While they are just simulators, these are specifically designed to feel and operate in the same way as an airplane in the sky, so while they are on the ground, a student can get an idea of ​​what it is like to be in the air in a safe learning environment.

These simulators have been developed and advanced in such a way that the FAA counts the hours spent in a simulator against the number of hours required for certification. Ultimately, of course, students will flee on their own. 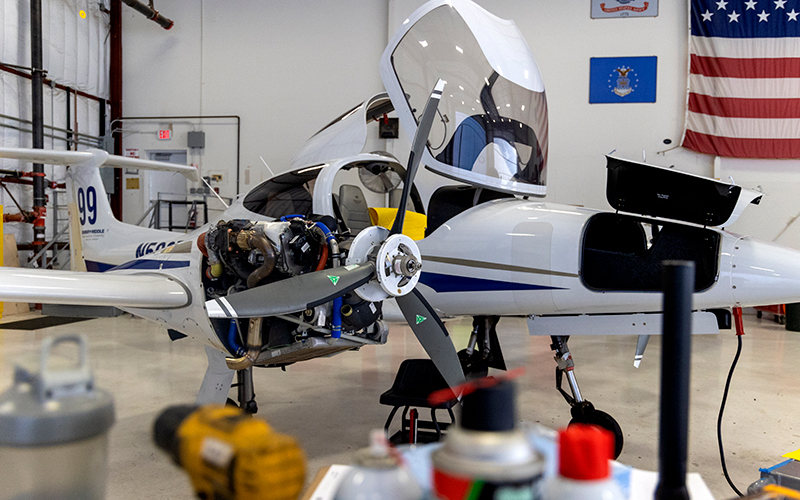 Parker Northrup has been chairman of the Flight Department since the summer of 2018. He has seen tremendous growth within the program ensuring that everyone can get the time they need in the air and keep track of maintenance on each aircraft.

Northrup called the flight school’s operations comparable to those of a small airline. With more than 100 flights a day, there is a down to the minute schedule of which students leave, when they return, which planes go in for maintenance, and more.

As a retired military pilot, Northrup knows the importance of teaching the next generation of pilots safe and effective flight. With Boeing forecasting a need for pilots and the school’s growing popularity, Northrup is booming.

For the past four years, enrollment has grown 15-20% each year, doubling since he became program president in 2018, Northrup said.

He is working on expanding Embry-Riddle’s space at the airport to accommodate the expected increase in students and planes in the coming years. They currently share airport space with Prescott Regional Airport.

The location has its advantages, as Prescott Regional is the only airport within miles of campus. The airspace around is clearer than it would be if the school were located in Phoenix or its sister campus in Daytona Beach, Florida.

The weather is also an advantage for students in Prescott, where conditions are often excellent for 330 days or more per year.

The university offers a degree in Aerospace Engineering, and just as future pilots gain experience in the air, future engineers gain experience repairing aircraft when they come in for maintenance.

Northrup compared it to making a cake. You have all your ingredients: students, instructors, mechanics and planes. Take one out, it won’t work. The cake would not be complete. But because they all work together, they are able to operate and excel in paving the way for the next generation of pilots.

The Prescott community has also embraced flight school. Last summer, the flying team was part of the Whiskey Row parade on July 4 in downtown Prescott.

Community support and the community itself have earned a special place in the heart of Northrup since he moved to the area. Shephard shares a similar feeling for the school and the city they call home.

“Embry is the best place in the world,” Shephard said.

“I’m always happiest when I’m flying, teaching and leading. And as chairman of this flight department, I get to do all those things every day,” Northrup said. “I can’t imagine being anywhere else.”