With its turquoise waters and white sand beaches, Fiji is synonymous with visions of paradise. Yet this South Pacific nation of 333 islands can be experienced in many ways and through different trip ideas. Let’s get started on planning your trip to Fiji with this introductory guide. 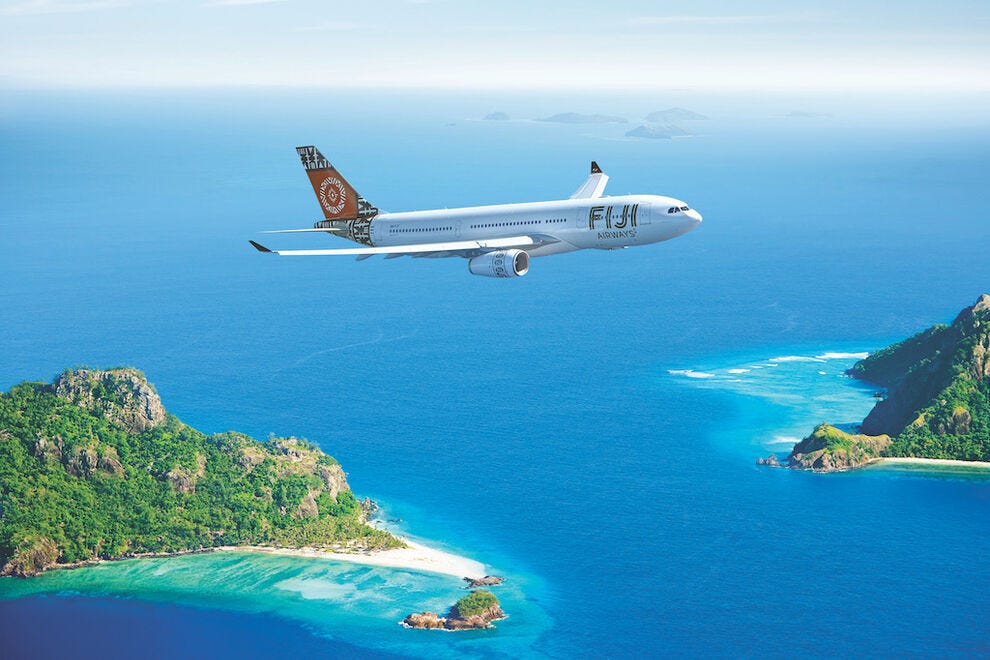 Fiji Airways also flies to and from Australia and New Zealand, along with Qantas, Virgin Australia, JetStar and Air New Zealand. 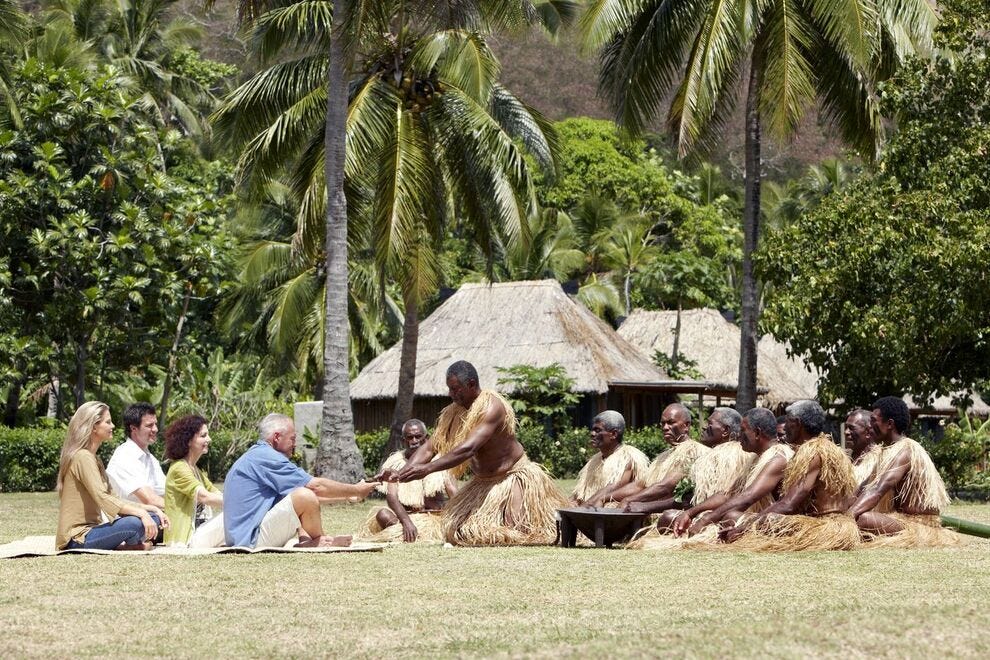 It is believed that the first Fijian settlers came from Melanesia about 3,500 years ago. The arrival of Europeans started with Dutch explorer Abel Tasman by ship in the late 17th century, followed by the British in the next century. Fiji would become a British Crown colony until gaining independence in October 1970.

Fiji’s Indian community originated from Indian indentured laborers sent during the mid-19th to early-20th centuries to work on sugarcane plantations. There’s also a Chinese diaspora going back over two centuries. 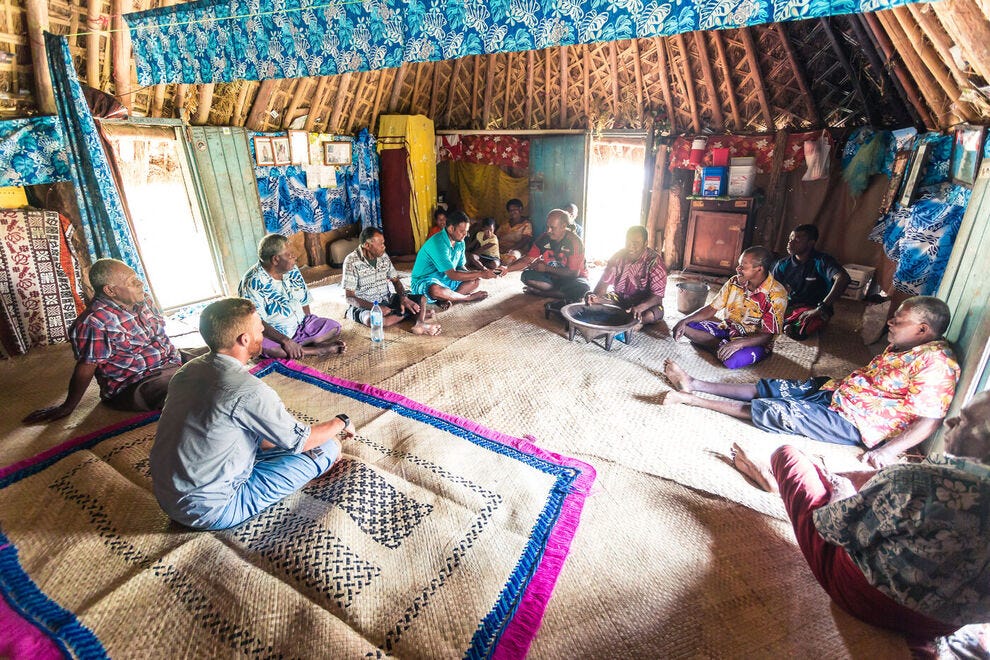 Travelers should practice certain etiquette when visiting a Fijian village, which could be done in part through resort stays. Dress modestly; avoid having bare shoulders or wearing shorts, short dresses or skirts.

Wearing a hat is seen as disrespectful. If entering a home or another building, remove your shoes.

The warmth of Fijians is shown through their friendliness. You will be greeted often with “Bula,” a common word meaning “hello” or “welcome.” Here’s another good word to learn: “vinaka” means “thank you.”

Visitors can also witness Fijian traditions. A kava ceremony involves a gathering in which this brownish drink – also known as “yaqona” – is made from the root of a pepper plant called Piper methysticum. It’s consumed from cups called “bilos.”

A “meke” combines dance and storytelling through song; at a resort, the staff may sing a Fijian song when guests arrive or depart. 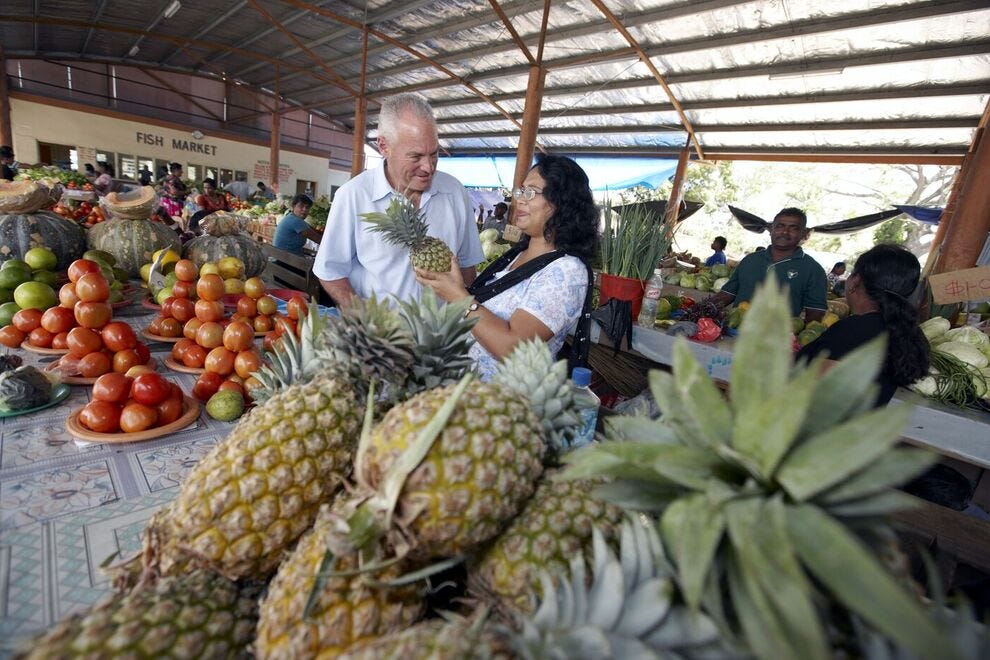 Viti Levu, Fiji’s largest island, is the location of Fiji’s largest cities: Suva, its capital, and Nadi. Along with parks and nightlife, Suva has the Suva Municipal Market, a handicraft center and the Fiji Museum.

Besides an airport, Nadi is surrounded by the Nausori Highlands, a mountain range, and markets selling vegetables and fruits. The colorful Sri Siva Subramaniya Temple is the largest Hindu temple in the Southern Hemisphere. Near Nadi, The Garden of the Sleeping Giant is an orchid range that belonged to actor Raymond Burr.

Viti Levu’s southern coast is referred to as “the Coral Coast.” Shangri-La’s Fijian Resort & Spa on Yanuca Island is the only Fijian private island destination accessible by road. It has three guest wings, two pools, five dining concepts, a spa with Fijian “bures” (wood and straw huts) for overnight treatments, a kids’ club and a wedding chapel.

About a 45-minute drive from Nadi Airport, the Fiji Marriott Resort Momi Bay has lagoon-facing beachfront villas and oceanfront and overwater bures. Along with a spa, fitness center and kids’ club, dining includes an Asian fusion bar/kitchen, a Mediterranean poolside spot and a seafood restaurant. 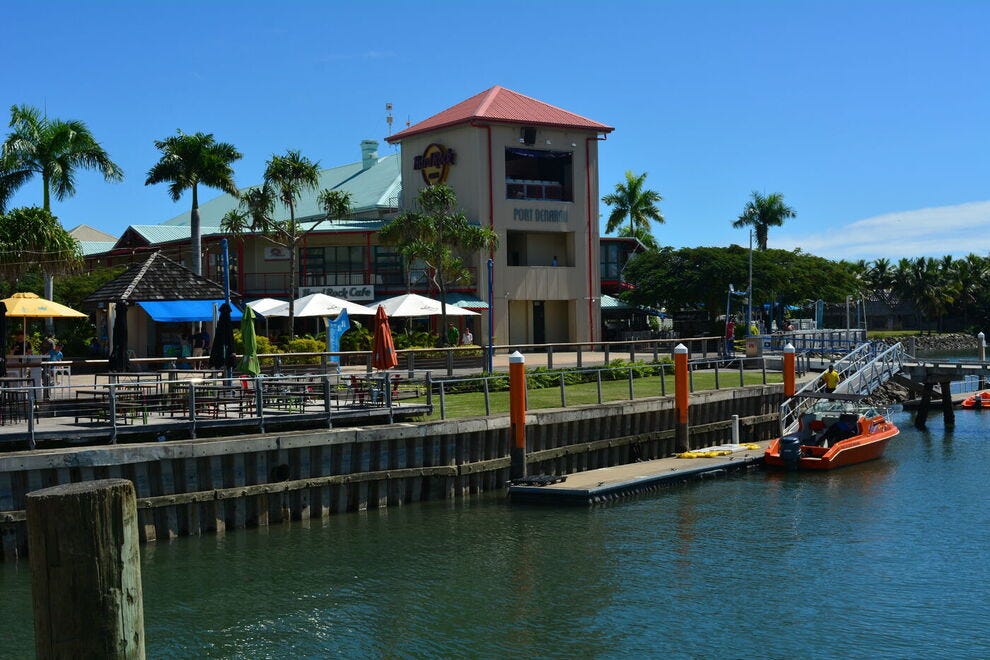 As a port, Denarau Island has ferries to other islands and resorts, chartered day excursions or extended sailings. Among other operators, South Sea Cruises Group offers resort transfers and day cruises; its “Sabre” catamaran launched in December 2021. 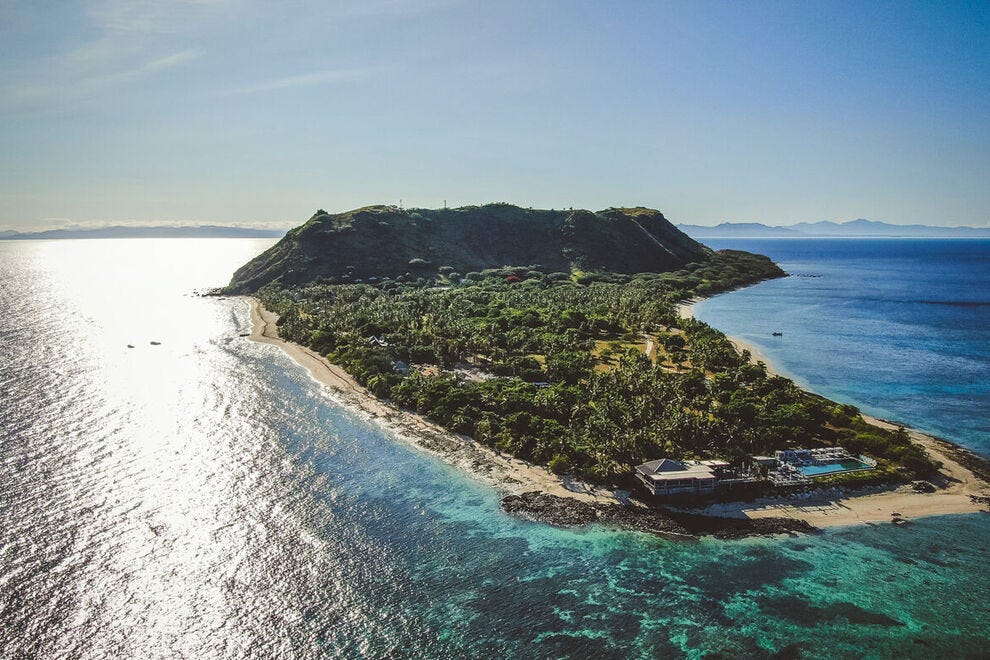 West of Viti Levu, the Mamanuca Islands are adorned with beachfronts, coral reefs and inland greenscape. Accessible by boat or helicopter, VOMO Island Fiji has private residences, beachfront or hillside villas, two restaurants and a spa; fitness excursions include hiking up Mount Vomo. At Vomo Lalai, the little sister island, a gourmet picnic meal can be pre-arranged.

Beyond the Mamanucas, the Yasawa Islands are a collection of 20 islands. Sawa-i-Lau, one of the islands, is known for its saltwater caves; it was made famous in the movie, “Blue Lagoon.” 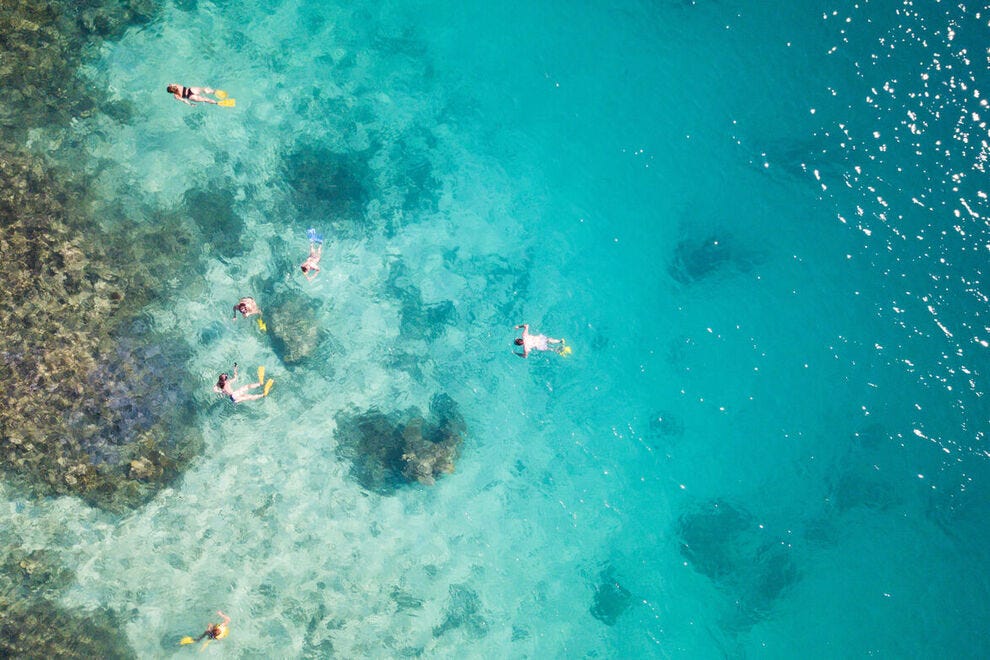 On Vanua Levu, Savusavu is referred to as Fiji’s “hidden paradise.” This coastal town has diving sites within the Namena Marine Reserve, and is home to J. Hunter Pearls, which makes jewelry with Savusavu Bay-sourced pearls. The untouched Waisali Rainforest Reserve, outside of Savusavu, can be seen via ranger led tours.

Get in the water 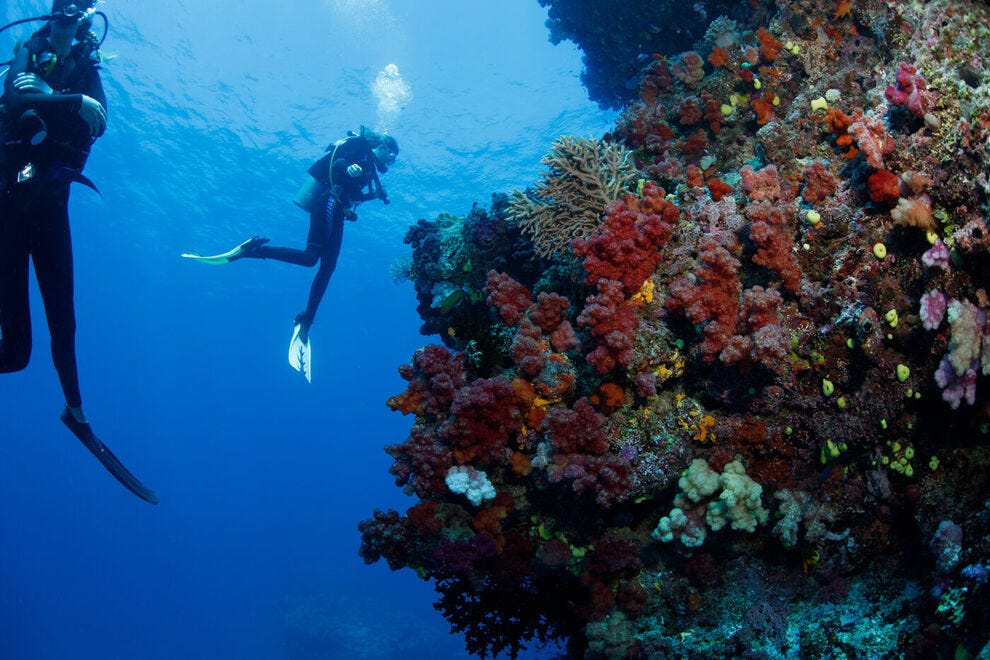 Fiji is a playground for swimming, snorkeling and scuba diving, among other in-water activities; they can be done through excursions or resort stays.

Many resorts offer PADI certification, such as Kokomo Private Island in Fiji’s Kadavu region. Jean-Michel Cousteau Resort on Vanua Levu Island has a diving center and a resident marine biologist. Volivoli Beach Resort on the Suncoast of Viti Levu has diving access to Bligh Water, also known as the Vatu-I-Ra Passage, a protected marine reserve. 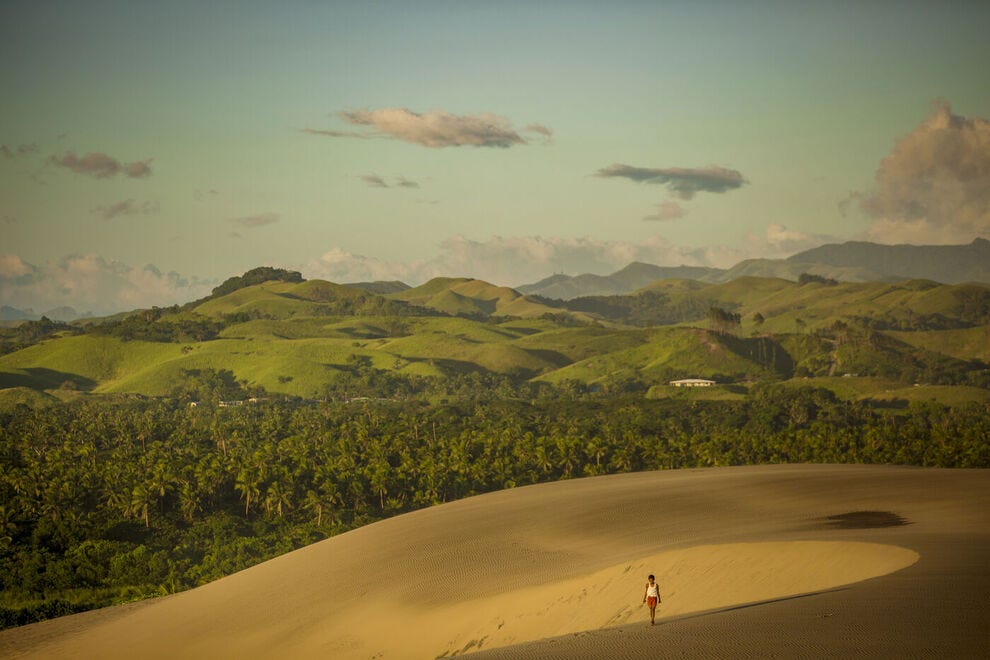 Fiji has many national parks and marine sanctuaries protecting natural wonders and historically significant places. On Taveuni, Fiji’s “Garden Isle,” Bouma World Heritage National Park is a splendor of rainforests and coastal jungles along with the Tavoro (or Bouma) Falls.

Viti Levu’s Sigatoka Sand Dunes National Park is considered to be one of Fiji’s earliest settlements and has many plant and bird species.

Traveling during the pandemic 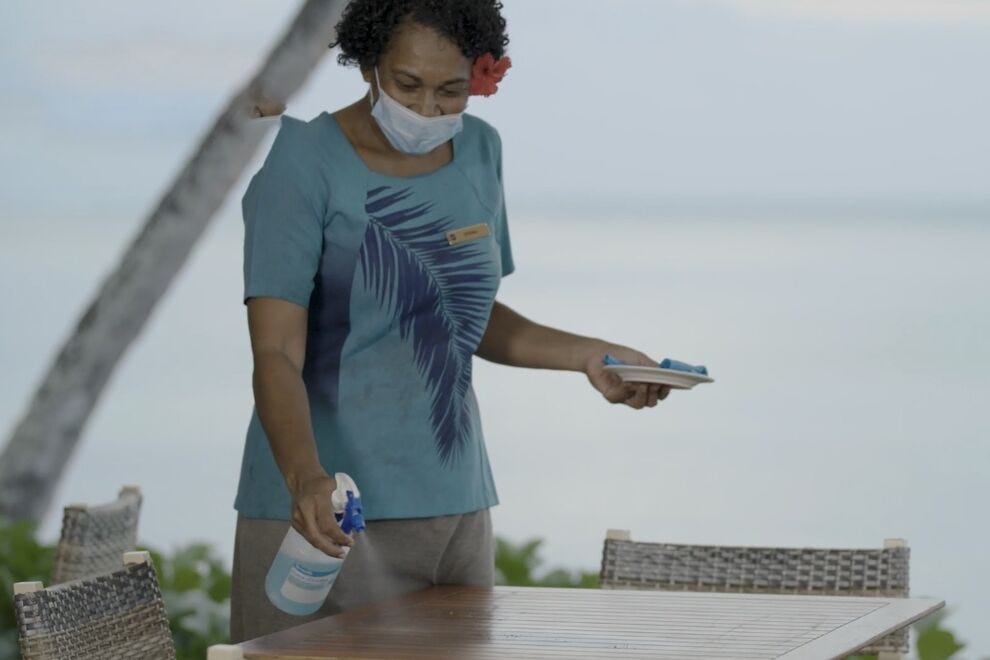 Amid the pandemic, travelers to Fiji have to meet certain requirements — Photo courtesy of Tourism Fiji

As of December 2021, Fiji reopened its borders to fully vaccinated travelers from Travel Partner countries. Along with proof of vaccination and testing requirements, visitors must stay at an accommodation in the Care Fiji Commitment program.

They also must download the careFIJI app, which assigns a self-identifying QR code to scan at various public places. A 48-hour test requirement must be done after your arrival. Upon leaving Fiji, visitors may need to have a negative test recorded depending on their next destination.