An oceanfront vacation home in the Outer Banks area made famous by the movie Nights in Rodanthe completely collapsed into the sea, most likely due to erosion, causing debris to wash up along the North Carolina shoreline on Wednesday morning.

Officials from the National Parks Service of the Cape Hatteras National Seashore warned visitors to ‘use caution when participating in recreational activities on the beach and in the ocean between the villages of Rodanthe and Salvo due to debris from a collapsed house.’

A press release sent out by the local National Parks Service noted that smaller amounts of debris were found more than seven miles away. Dare County is working with the agency to clear the crumbled house and remove the debris from the ocean.

The cozy beach town in the Outer Banks became a popular destination after the 2008 premiere of the Nicholas Sparks movie Nights in Rodanthe that starred Richard Gere and Diane Lane, which was set in the coastal town.

The 1,960-square-foot structure was built in 1980 near the Rodanthe Pier on what has become an erosion-prone stretch of beach.

Photos show the beige house sunken into the sand of the shoreline with its top floor crushing the bottom.

The siding and panels on the front of the building can be seen jutting into the air after having come unattached from the exterior. 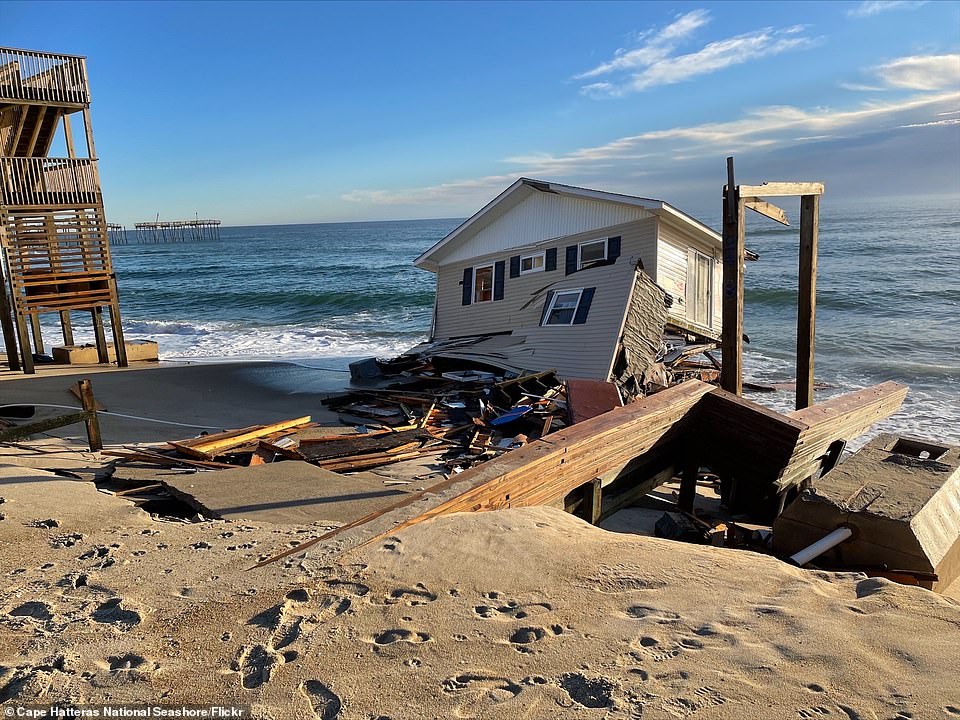 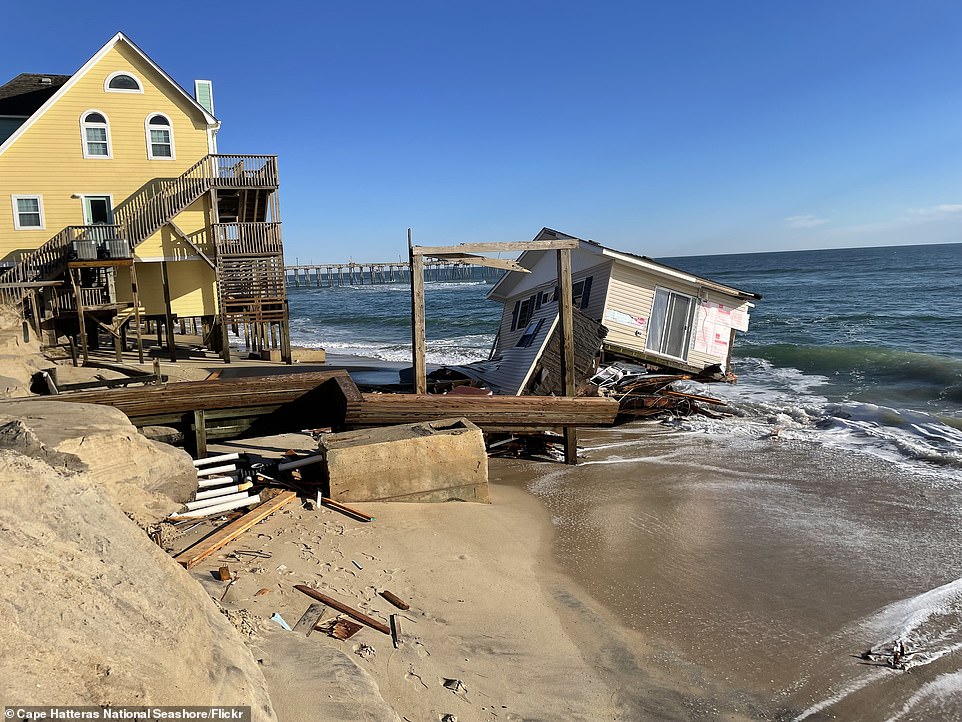 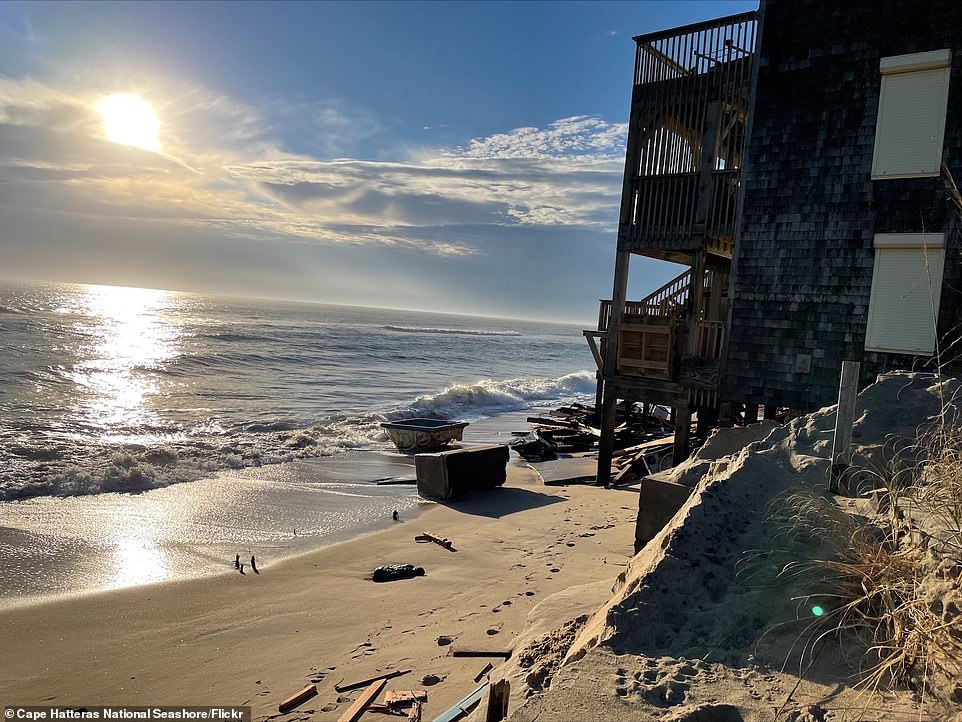 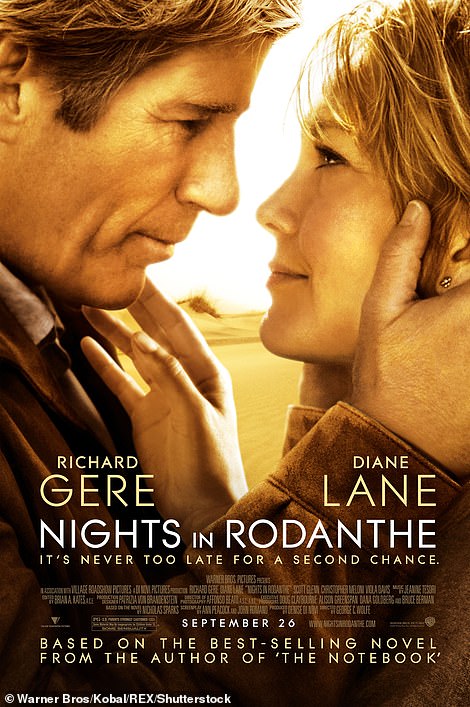 Wood is seen strewn along the beach with the home completely off its base structure sitting in the shallow waves.

A side view of the house shows how it landed in the ocean after falling backward into the water demolishing the two-story wooden back porch.

The five-bedroom cottage in the Trade Winds Beaches subdivision was owned by Robert Carroll and Wanda Twiford Coleman of Virginia Beach, Virginia, according to county tax records.

The nautical themed rental was estimated to be worth $491,200, according to Zillow.

It was managed by Surf or Sound Realty as a vacation rental with private beach access.

The owners of the property will need to submit a removal plan to the National Parks Service to be issued a special use permit to clear the area.

It is unclear how the house collapsed but an investigation into the incident will be conducted by the city.

The house appeared to be unoccupied, and no injuries were reported via the 911 system, Drew Pearson, Dare County’s director of emergency management, confirmed to Coastal Review.

A National Parks official told DailyMail.com that it was unclear how much the beach in this area has eroded over the years. 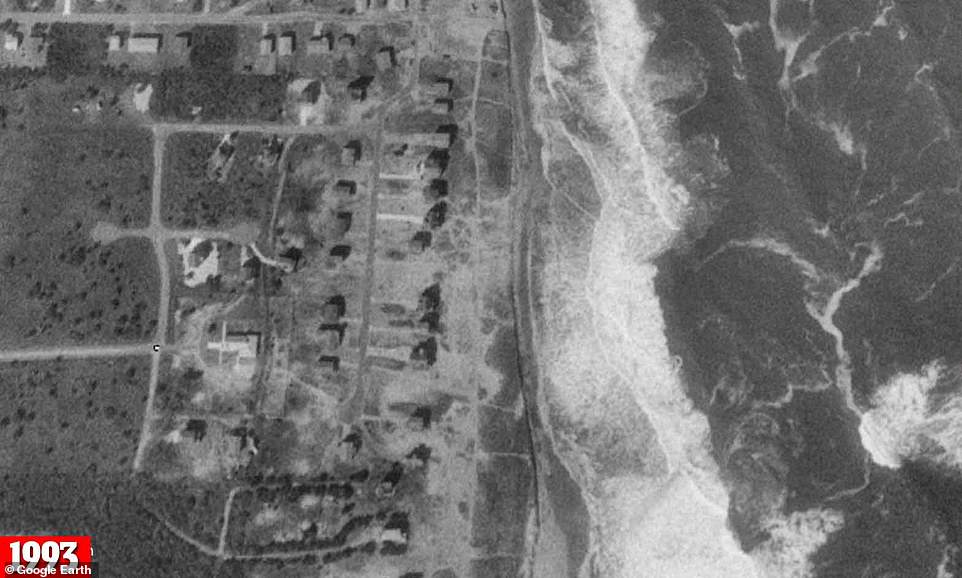 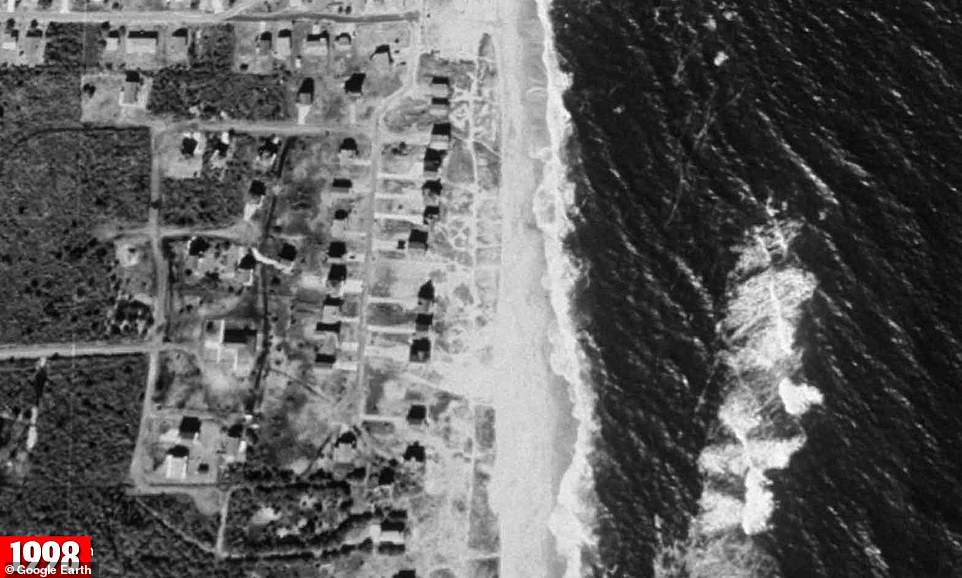 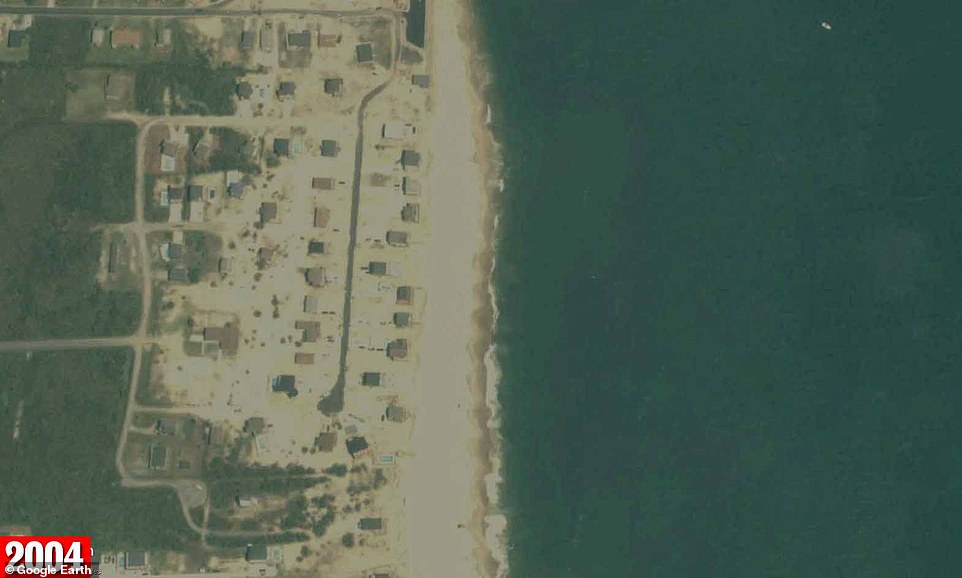 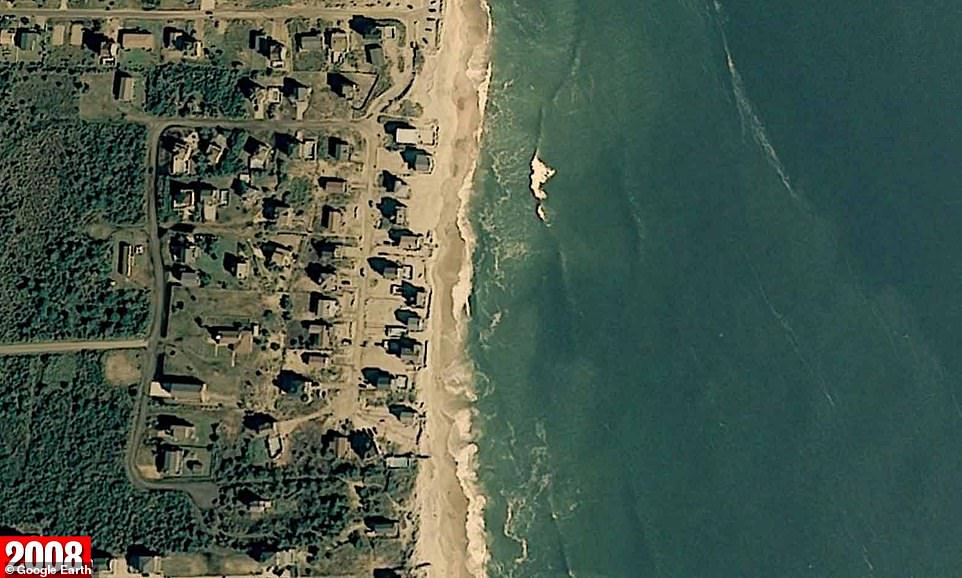 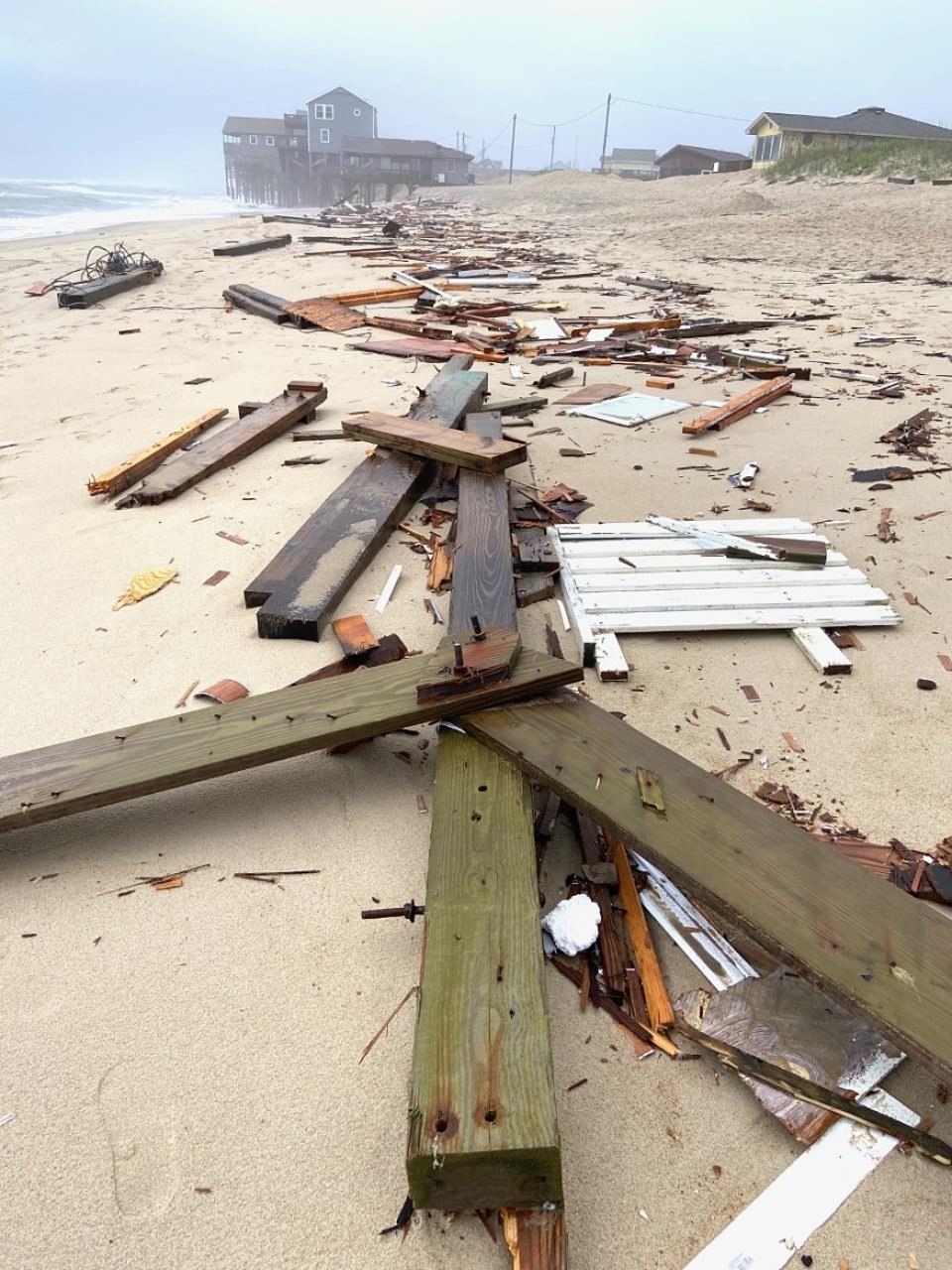 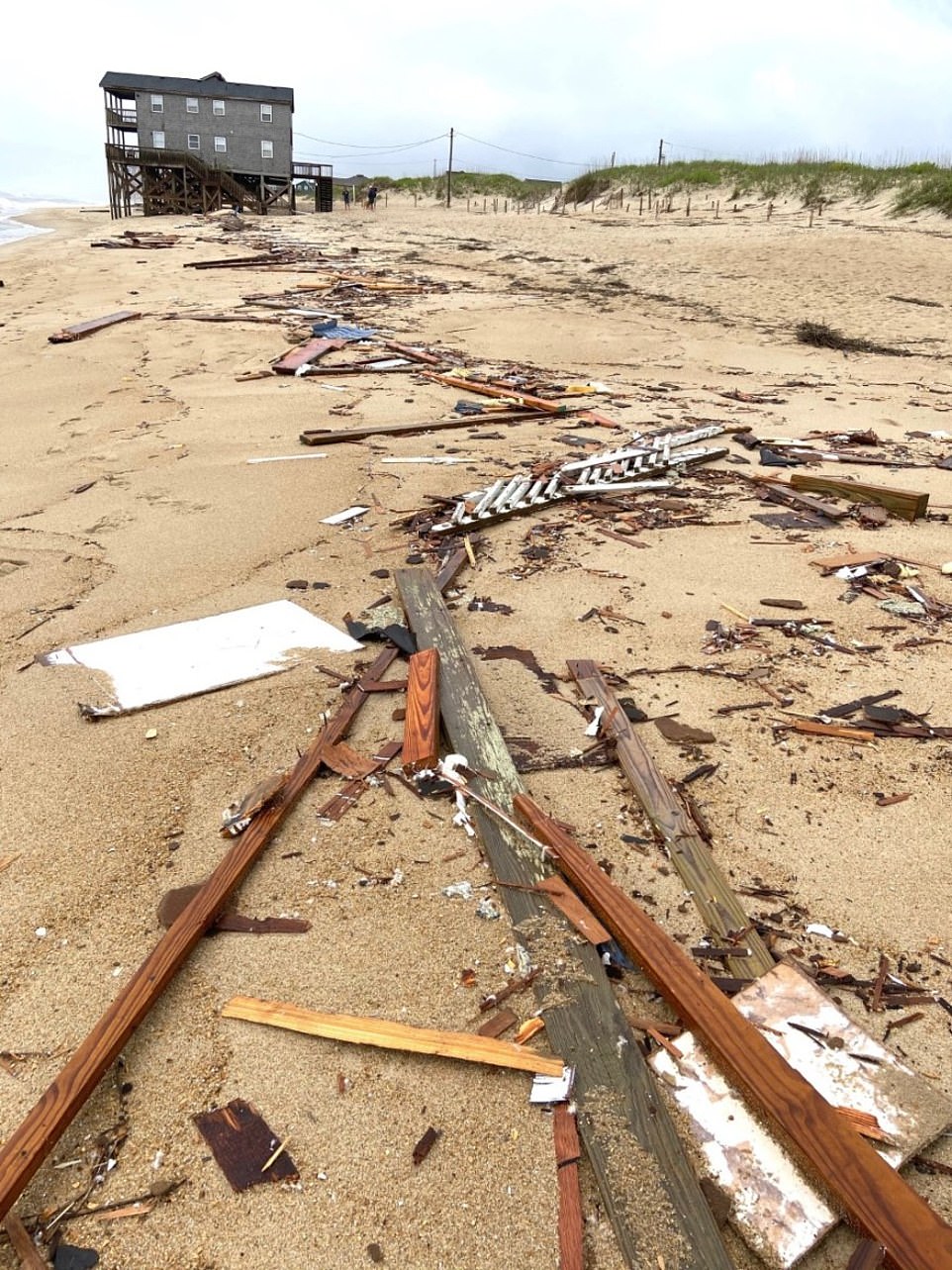 This isn’t the first house to collapse along the Outer Banks shoreline recently.

In 2020, a man walking his dog in Rodanthe came across a long stretch of debris that was later determined to have been left behind by a house that washed away.

Only remnants of the home, a couple of pilings and exposed septic parts remained.

The collapsed house was advertised as a vacation rental built in 1977. The incident displaced renters from neighboring homes.

In recent years, erosion has devoured the shoreline along the sandy southern islands with some houses now sitting on the edge of the ocean.

Officials in the area plan to begin a major restoration project between late spring and early fall this year.

The project is estimated to cost $13,952,137 and will be funded by a FEMA/North Carolina disaster assistance and the North Carolina Department of Environmental Quality, Division of Water Resources Coastal Storm Damage Mitigation.

The rest of the bill will be covered from the Town of Nags Head’s beach nourishment capital reserve.