When the pandemic hit in early 2020 one of the first industries that got hit by it has been airlines as the closure of international borders resulted in mass cancellations of flights and created a massive cash crunch for carriers as refunds were due.

Several airlines including British Airways then resorted to “refund” funds for canceled flights in vouchers rather than cash in an effort to solve their liquidity problem but many customers have been sitting on these vouchers ever since without being able to use them.

British Airways was particularly deceptive in this way as the only way to get a cash refund was to call the airline after they disabled the refund button on the website and instead replaced it with a link to a website that only allowed to request a voucher.

I wrote about it when this issue was at its peak:

Canceling Both Award & Revenue Flights With British Airways: A Mess at Best, A Scam At Worst!

Then John followed up at the end of that same year when BA finally returned the option to request cash refunds online after getting lots of flak for their scam from the media:

This was too late for many who had requested one of the vouchers and who were told by British Airways “Sorry, you agreed to take a voucher and now you’re stuck with it”.

In fact, that’s not correct. Many customers have since taken British Airways to court or opened a mediation case where BA was ordered to refund the money as due as they tricked the customer into accepting a voucher.

Others have received an email during the last week that British Airways would now refund their vouchers automatically but only to the original form of payment.

Here is what they are now communicating to customers: 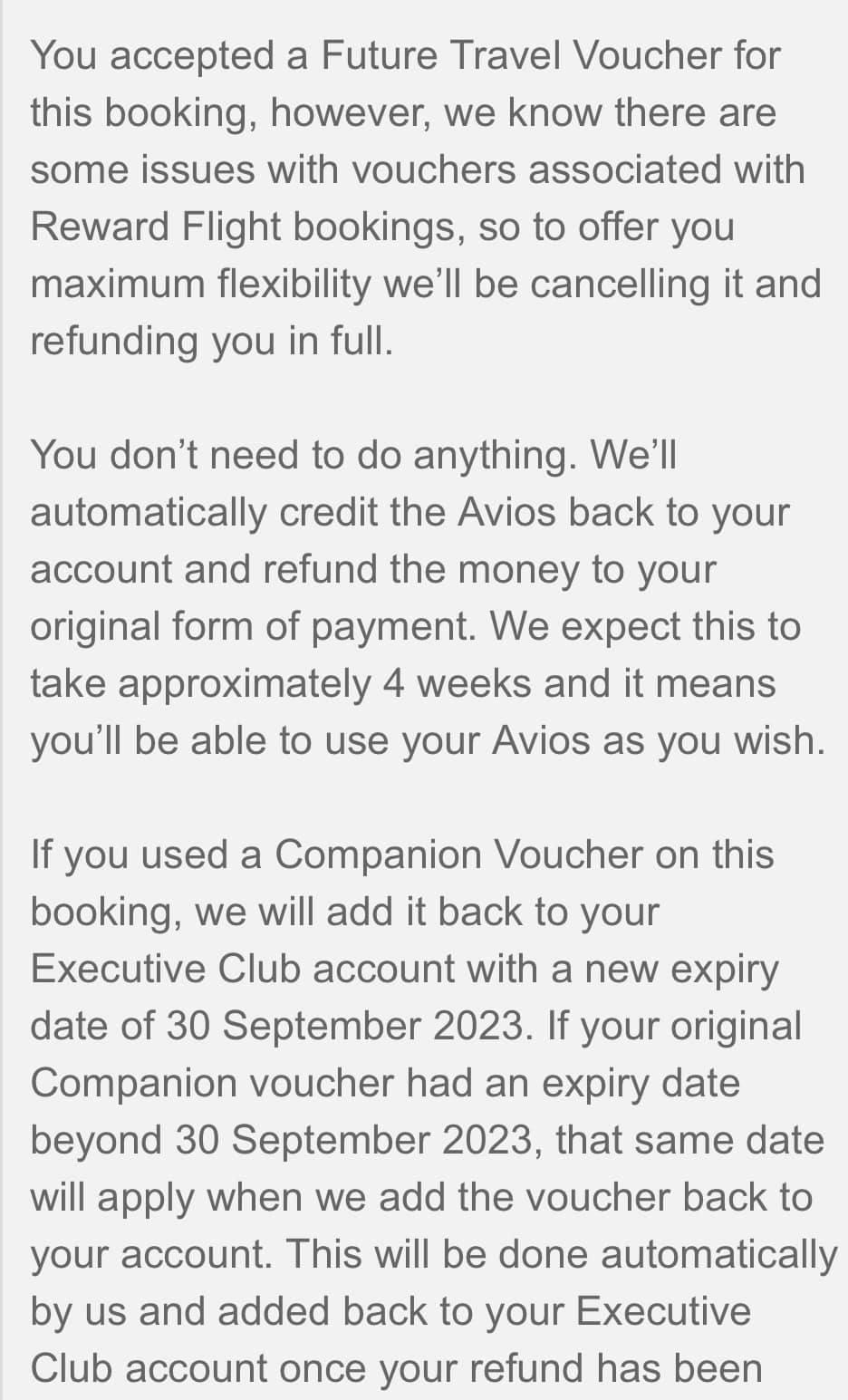 If you’re still sitting on such a voucher resulting from a flight BA canceled I recommend to also complain to their customer care team and then (when they refuse) involve the ombudsman or a court.

Refunding money to the original form of payment (most often a credit/debit card) two years later will come with issues such as card accounts having already been canceled, flights having been paid by a different person, etc.

Usually, a bank or credit card company will send a credit note to a customer whose accounts have been closed since then. Alternatively, they credit those accounts that still exist even if the new card number is different.

It’s important to keep your current address on file with such banks whose cards you cancel and where refunds might be due… just in case.

British Airways has sent an email to some customer who had previously accepted a travel voucher for a canceled flight as there appear to be further problems in the redemption process.

The airline has been in hot water before when it came to their vouchers and it’s now been two years since these were first issued. Many customers were so far unable to use their vouchers due to a lack of travel options.

Do you still have outstanding British Airways vouchers resulting from cancellation during the pandemic?