HUNDREDS of Brits have been left stranded in Cancun with no flights to the UK for five days after TUI “abandoned” them.

Dozens of holidaymakers were forced to miss their planes home when the roads around the airport were blocked by Mexican truckers protesting tax increases and fuel prices.

Pictures show the chaos at the airport as at least 200 British holidaymakers found themselves stuck in the resort, while footage shows massive queues of people with their luggage desperate for answers as they try to find out how to get home.

One couple who were on their dream Tui holiday have accused the travel firm and British Airways of “abandoning” them as their flight to London took off without them on board.

Chris Hewett, 35, and Lisa, 36, purchased a Tui travel package in Cancun after their original getaway was cut short due to Covid.

The pair – along with hundreds of other Brits – ended up missing their flights back home because of protests around the airport. 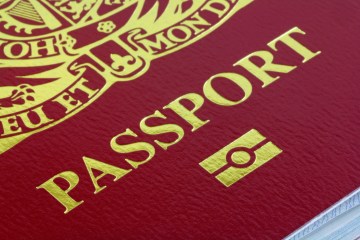 And when they pleaded with the airline and the travel firm to help they claim were told they had to make their own arrangements.

They and the other British faced being stranded in Cancun for five days because there were no direct flights back to the UK.

However, they luckily managed to secure the visas and necessary Covid tests to leave on a stop-over flight to Philadelphia, US.

Amid the chaos, pictures show mums cradling their children, and one little boy was seen sleeping on the floor of Cancun International Airport along with other passengers unable to find accommodation for the night.

Some travelers were taken to a hotel hired by Tui but bailed when they arrived at what appeared to be a construction site.

“The problem was not paying for flights. It was getting flights.

“There were no flights home and we were completely stranded in Cancun, apart from some complex ways of getting back and Tui didn’t want to deal with us and neither did BA.

“It’s been a crazy situation. Very upsetting and very traumatic.

“To be stuck in Cancun with no options of getting home – being abandoned in Mexico by these massive companies – it’s crazy.”

Chris, Lisa and the other British tourists found themselves stuck in traffic for five hours amid the nationwide trucker protest.

They were helpless as time ticked on and they missed both flights back to the UK.

Chris told The Sun Online: “We arrived and there were probably 60 to 70 people stood in the terminal and all the check-in desks were closed and there was absolutely no one around.”

“I was told by Tui 280 people were due on the plane and only 80 checked in onto the flight.

“We were expecting someone from BA, someone from Tui, to be at the terminal to sort of greet us and tell us what was going on but there was no one.

“And when we spoke to the customer service desks both of them said there was nothing they could do and that we had to get ourselves home.”

Single mum-of-four Beth Calvert, 29, from Manchester, was left behind while more British holidaymakers kept on streaming into the airport looking for a flight home.

The exhausted mum begged Tui for help after running out of cash and clothes but says she was told her family weren’t a priority.

“There were people everywhere. It was ridiculous,” Beth said.

“My daughter was crying and then we had the baby who was crawling around on the dirty airport floor because obviously he had been in the car for so long.”

Things only got worse for the 29-year-old Mancunian when her credit card stopped working and was told she had to travel half-an-hour away from the airport to find accommodation, which cost her £700.

“At one point, I was speaking to a guy who was talking to his manager. He confirmed we were on the flight and confirmed our seats and then the next person had no idea about it.

“It was literally all by word. Whenever I asked for an email to confirm things, they never did.”

Eventually Tui got her and her four young kids on a flight to Gatwick instead of Manchester.

The firm says travelers were provided with onward transport.

Others were put in a waiting list and told to come back the following day only to be told that flights had been booked out for five days.

Chris and Lisa had been booked on one of two planes leaving Cancun for the UK on Tuesday.

And they were then told there were no direct flights back to Britain for a week.

The couple eventually managed to leave in a stop-over flight in Philadelphia, US, but not before applying for a travel visa and waiting in a “big old queue” outside the airport for Covid tests.

They also had to pay £120 a night to stay in a hotel room and told by their travel insurers they had a £1,000 spending limit which included flights, which were already going for £1,800 each.

Tui said: “We understand how frustrating it was for customers who missed their return flight due to an unexpected strike blockade near Cancun airport.

“While this was out of our control, we did everything we could to support them with hotels and an alternative flight home quickly as possible.”