The boss of British Airways says the airline will have to cut flights over the next few weeks to avoid another meltdown after thousands of passengers were stranded on planes or left waiting hours to be reunited with their luggage.

In an internal message to staff, chief executive Sean Doyle admitted passengers and employees are ‘fed up’ with the recent issues, but said there were ‘no quick fixes’ to the disruption.

He said flights would have to be canceled over the next few weeks, causing potential chaos for families looking to get away over the Easter holidays.

Last weekend, as many as 192 BA flights were disrupted, with passengers left queuing for more than an hour to check in their bags and others forced to return home without their luggage.

In February, passengers were also hit by chaos from BA as more than 500 flights were canceled or delayed after the airline suffered its biggest IT meltdown for years.

It comes after the airline – which announced it was scrapping masks on flights – reversed course and warned people they must still put them on if they are going to one of 50 destinations. 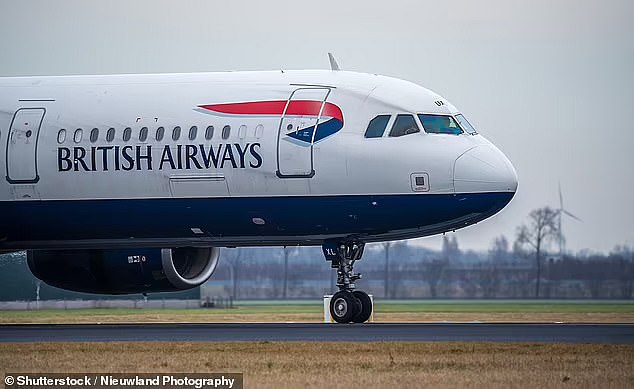 In his recorded video address to staff, Mr Doyle said the weekend was ‘difficult’ off the back of storms and two system issues.

He said the schedule at Heathrow and Gatwick will be reduced ‘over the coming weeks to give us more wriggle room’ and that customers would be given the option to book onto flights as close to their original departure time as possible, or be offered a refund .

He also said dozens of staff would be re-deployed onto customer service teams after the weekend’s disruption ‘exacerbated call and social media queues’.

The issues have come at the worst time for BA, with bookings at their highest levels since the start of the pandemic after the UK and most European countries ditched Covid traveler tests for fully vaccinated holidaymakers.

Over the weekend, passengers at Heathrow said there were ‘not enough staff to explain what was going on’ and a lot of the desks looked ‘unmanned’ at the baggage check-in at Terminal 5.

Airport Operators Association (AOA) released a report today which said just ten per cent of the aviation jobs lost during the pandemic – as a result of the huge reduction in passenger numbers it caused – have been restored, leaving many airports understaffed.

The report found that UK airports suffered an even worse 2021 when compared to 2020.

As a result, airports in the UK reported losses topping £10billion last year. 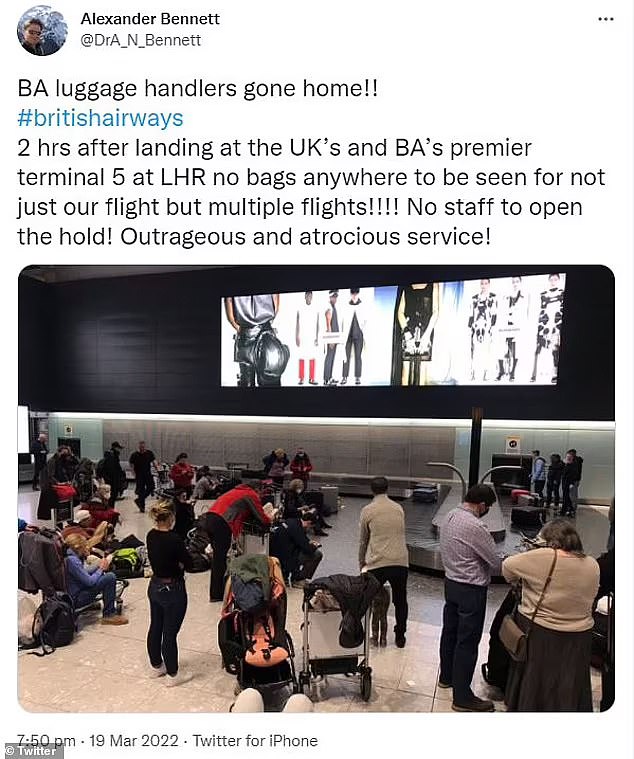 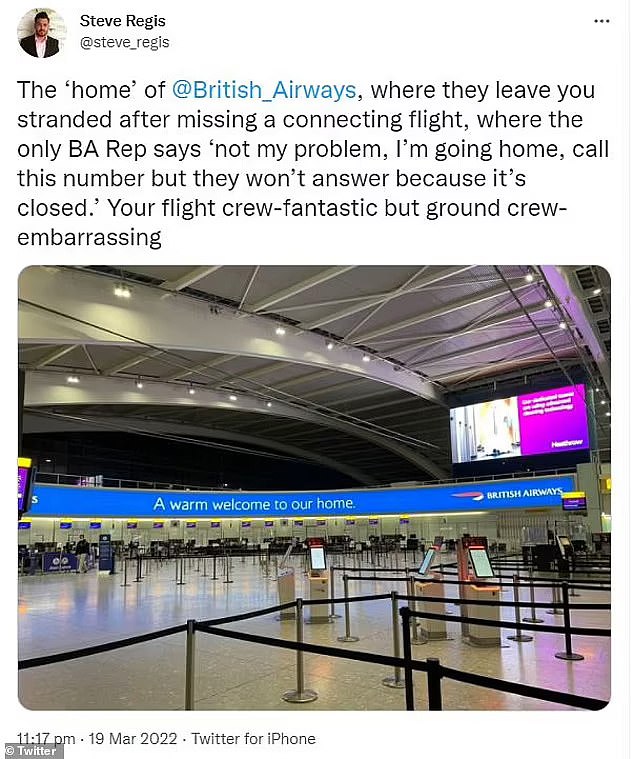 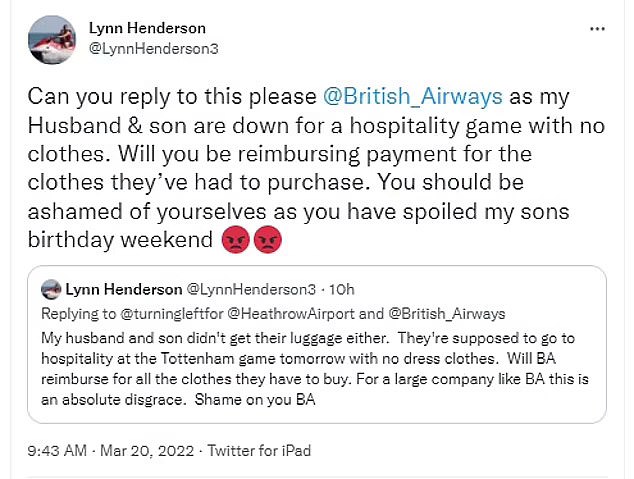 She added: ‘Aviation in the UK is something we are very good at and we are optimistic about that and we have seen the UK government move really quickly to remove all the remaining restrictions.

‘I think what our report has shown though is that we have taken quite a big hit in the UK and it will be a very competitive process for bringing back those really important routes that support businesses across the UK and our ability to export, to travel around the world and to connect globally and within the UK.

‘The more that we can do to bring that back, to generate those routes that are really important the better.’

In response to reports over the weekend that Manchester Airport has been struggling to recruit following the pandemic, Ms Dee added: ‘Clearly there is a challenge for airports. We weren’t able to staff up as quickly as we wanted to.

‘Demand is clearly there and that is coming back more quickly than we’re able to, in some places, recruit.

‘So we are having to recruit for those staff to replace the people that sadly we lost during the pandemic and that is causing some challenges when you are getting some peaks of demand.

‘Most airports are recruiting as quickly as they can at the moment and we hope we will be back to offering a great service to passengers as we move forward.’

Ms Dee said airport owners have been investing, despite the losses, but the challenge remains ‘scaling up very quickly’ and ‘replacing staff’ as passenger numbers return to pre-pandemic levels.

In a sign of the increasing demand for air travel, Gatwick Airport announced it was reopening its south terminal – which had been dormant since June 15, 2020, to reduce costs during the pandemic – to meet expected strong demand this summer.

Flights have been ramping up from around 300 to 570 a day — the equivalent to opening a medium-sized airport overnight.

A British Airways spokesperson said: ‘Aviation has been one of the industries worst hit by the pandemic and airlines and airports are experiencing the same issues rebuilding their operations while managing the continuing impact of Covid. We have also today launched a completely new subsidiary at Gatwick while increasing the size of our schedule at Heathrow.

‘Our experience in the last few weeks has shown we need to build more resilience into our operation to manage staff sickness and our remaining outstanding vacancies in order to provide a consistent service for customers rather than letting them down at the last minute. So while the vast majority of our flights continue to operate as planned, as a precaution we’ve slightly reduced our schedule between now and the end of May as we ramp back up.

‘We’ve apologised to customers who are affected by this and to limit the inconvenience have re-booked them onto earlier or later flights on the same day they were originally due to travel where possible. We’re also offering them the opportunity to book onto an alternative flight or request a full refund.’