On Monday, the court heard argument in Southwest Airlines Co. v. Saxon, about the scope of the Federal Arbitration Act’s exemption for “contracts of employment of seamen, railroad employees, or any other class of workers engaged in foreign or interstate commerce.” Latrice Saxon, who works for Southwest Airlines as a ramp-agent supervisor at Chicago Midway Airport, urged the court to decide that most airline employees – as well as most employees of shipping companies like FedEx or UPS – are exempt from the FAA because they are engaged in interstate commerce. But Southwest argued that the court should read that language much more narrowly, to exempt only workers in job categories that involve crossing state or national borders.

At argument, several justices seemed to think that ramp agents fell within the exemption, meaning that Southwest would not be able to rely on the FAA to enforce Saxon’s arbitration agreement. But the court may not go as far as Saxon wants – multiple justices also expressed interest in a “middle-ground” approach, which likely bodes well for Southwest’s supporters, including “gig economy” companies Uber and Lyft.

The contested ground in this case is relatively limited. There was general agreement among both the justices and the advocates that the court should determine who qualifies under the exemption’s “residual clause” – that is, who is part of “any other class of workers engaged in foreign or interstate commerce” – by focusing on how that language would have been understood when the FAA was enacted in 1925. Everyone also seemed to agree that the court should consider who counted as a “seaman” or a “railroad employee” in 1925, and then interpret the residual category to cover similar types of workers.

With that ground staked out, Shay Dvoretzky, representing Southwest, urged the court to focus on the original meaning of “seamen.” In 1925, he argued, this category included only people who worked on-board vessels, and excluded stevedores, who – like airline ramp agents – worked loading and unloading cargo. This was true, Dvoretzky continued in response to questioning by Chief Justice John Roberts, even if some workers within a given job category did not actually cross borders themselves. Roberts pressed for more guidance on how to distinguish a covered from a non-covered class of worker, because he was “trying to figure out … exactly what you’re sweeping under the rug” – quickly adding that he didn’t mean that “ in a pejorative sense.” 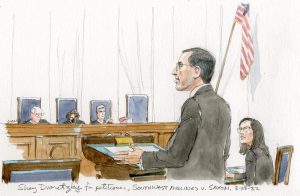 There was much more conversation about stevedores to come. Justices Sonia Sotomayor and Elena Kagan both observed that even if stevedores weren’t “seamen,” cargo loaders were “railroad employees.” “If railroad baggage handlers are covered, is there any possible way that airline ramp workers would not be covered?” Kagan asked. Dvoretzky responded that the transportation-worker exemption should be narrowly constructed in light of the FAA’s pro-arbitration purpose – a response that did not seem to convince Kagan, who replied, “Didn’t we say not to do that in New Prime† Later, Justice Neil Gorsuch, who authored the unanimous opinion in New Prime Inc, v. Oliveira, also asked about stevedores, characterizing the point that they did not count as seamen as Southwest’s “strongest argument.” But Jennifer Bennett, representing Saxon, responded that the term “seamen” was not always understood to exclude stevedores, and she later posited that, even if stevedores were not seamen, they still could have been covered by the residual clause – a result that Justice Brett Kavanaugh called “a little odd.”

While Gorsuch thought stevedores were a point in Southwest’s favor, he found “wharfage” – a cargo loading or unloading fee paid to a dock owner – pointed the other way. The section of the FAA that contains the transportation-worker exemption also refers to “maritime transactions,” which include “agreements related to wharfage … or any other matters in foreign commerce.” As Gorsuch put it, “if [a wharfage contract] is considered in interstate or in foreign commerce,” “that seems a rather specific textual clue.” Dvoretzky replied that he thought “in foreign commerce” should not be read to modify “agreements related to wharfage” – but Justice Clarence Thomas (who participated in the argument by phone after his recent hospital stay) later returned to this topic, implying he was not convinced by Dvoretzky’s answer to Gorsuch.

As with “seamen,” the argument also focused on who qualified as a “railroad employee,” and several justices indicated that they thought cargo loaders and unloaders were included. Gorsuch pressed Dvoretzky on this issue, as did Kagan and Kavanaugh, who pointed to a 1924 case in which the court interpreted similar statutory language, writing that it was “too plain to require discussion” that loading or unloading interstate shipments was “practically a part or” interstate transportation.

Although it seems likely that a court majority will agree with Saxon that ramp agents qualify for the transportation-worker exemption, it is less certain that they will agree that most airline employees also qualify. Various justices raised hypotheticals intended to get at the limits of Saxon’s proposed test: Would the airline’s general counsel be covered? Someone who designs Southwest’s website? Ticket agents? Bennett responded that the exemption would exclude managers, as well as groups of workers who did not do the “customary work of the company” – for example, those who administered an airline’s “credit card points program.” But Kagan asked Bennett for an alternative, narrower test, “if we decide to go that route.” Bennett proposed that the exemption covered “at the very least … people who handle goods while they’re in commerce.”

This exchange opened onto a broader discussion of what other industries and companies might employ workers who are covered by the transportation-worker exemption: trucking, bussing, and “perhaps space travel,” Bennett suggested. But she also said that in 1925 “railroad and seamen were really people who worked in industries that shipped goods for the public, so if we’re talking about a company that is shipping its own goods, those people likely wouldn’t have been railroad employees or seamen at the time.” This would rule in FedEx and UPS employees who work in freight warehouses – but not Amazon warehouse workers who pack goods for shipment. And, in response to a question from Gorsuch, Bennett said Uber and Lyft drivers would likely also fall outside the exemption, even when they transported passengers on the last leg of an interstate journey.

One last factor bodes well for Saxon. Justice Amy Comey Barrett was recused from this case, and Saxon won in the appellate court – meaning that she needs to win the votes of only four justices to prevail. But it seems likely that she will win an outright majority, and perhaps even a unanimous decision – though probably not one that goes as far as she hopes.