If you’re a nurse interested in simply picking up a few extra shifts without a full commitment, we might just have the solution for you.

Nurse Alice interviewed ICU nurse Will Patterson, who created CareRev, an app that directly connects healthcare facilities to per diem healthcare professionals. Tune in to the podcast episode to hear the interview directly (along with some bonus advice for budding nurse entrepreneurs) and read on to learn more about how the app works.

In the episode, Nurse Creates ‘Gig Worker’ App For Nurses To Book Shifts Directly With Facilities (Will Patterson, former ICU nurse, and CEO of CareRev) Nurse Alice learns all about this interesting app for nurses!

CareRev flips the switch and instead, offers nurses and other healthcare professionals the chance to work as independent contractors. That means that the nurse is employed as a 1099 employee-–or “gig” worker—directly with the hospital. That also means that the nurse is technically the business owner, not the nursing agency. This allows the nurse to pick up shifts directly posted by the hospital and not commit to full contracts. For instance, a nurse using CareRev could pick up as little as one shift and never do it again, or as many as they can find in the area they would like, even at different facilities.

Patterson’s app has the potential to change the landscape of the entire healthcare industry, with nurses in control of what shifts they make up and when, but it also comes with some trade-offs, like any gig work, such as a lack of benefits. But Patterson sees CareRev as a “win-win” for both healthcare facilities and nurses looking for flexible work, as well as the patients that will benefit from increased care.

“It’s a better connection the friction on both sides,” he pointed out, referencing the difference between CareRev and a nursing staffing agency. “It’s a win-win for everybody, the healthcare system is getting people when they need them to take care of their patients. The patients are getting the care they need with the right professional, and then the professionals are getting the flexibility they need.”

From Island Life to the ICU

Patterson shared that his journey into nursing started when he was only 14, when he witnessed his father have a heart attack. “We drove him to the ER and I saw the nurses and doctors taking care of them,” he explained. “And I was intrigued—they saved my father’s life. So at that moment, I had a huge amount of respect for healthcare professionals. And that was kind of like the start of this journey towards becoming a nurse.”

Despite his initial interest in the healthcare world, Patterson went the business route during his undergrad at UGA (“I failed organic chemistry,” he laughed) and wound up working on the island of Kaui. But island life aside, Patterson craved more.

“I really wanted to make an impact in the community,” he said. So, after meeting some nurses and learning more about what they did, he decided it was finally time to take an official step into the nursing field. He enrolled at Duke University and set his sights on becoming a cardiac nurse.

Eventually, he went on to work in the neurosurgical ICU and in different healthcare systems around the country, from Scripps in San Diego to Santa Barbara to finishing up his bedside career at San Francisco General.

“I loved being a nurse,” Patterson said. “Absolutely loved it.”

Solving a Gap in the Healthcare Industry

Despite his love for working as a nurse, Patterson saw a big problem in the ways that ICU staffed nurses. Because the ICU was mostly staffed on a fixed schedule, problems could arise when new patients needed to be admitted and managers were calling, begging people to come in and help. And in an ICU setting, especially, understaffing can quickly lead to dangerous situations for both patients and nurses. Patterson is still troubled by a situation he ran into when he missed a sepsis diagnosis on a patient because he had to take on a fourth patient.

“And so I really wanted to solve for this because I could see like, hey, if we had like a flexible pool to pull from that wasn’t just the hospital staff or we could trade, you know, nurses with other hospitals in town , where the demand was, maybe we could you know solve for this,” he explained.

Along with that idea in his mind, Patterson considered the fact that he was always looking for flexible jobs to help pay down his six-figure Duke debt. But any per diem nursing job he looked at wanted him to commit to a certain amount of shifts or work weekends only, and all he wanted was one extra shift a week. And he wasn’t alone—retired nurses, friends who were single parents or those who needed childcare, and people still in school were all looking for flexible work, just like him.

“So here’s this large pool of health care professionals—there’s 18 million of us nationwide—that want either extra shifts or a flexible work model. And here’s these healthcare systems that need flexible help to meet the swings in patient demand,” he said. “And it was kind of this aha moment.”

Patterson pointed out that other industries utilize labor marketplaces powered by technology, but a staffing solution powered by technology was notably lacking in healthcare. He began to wonder if he had stumbled onto something—but it wasn’t until he met his wife, Sophia, at Burning Man in 2014, a woman who just so happened to have started three technology companies, that he launched his idea.

Sophia served as his mentor and helped him get the company off the ground. “She’s really the inspiration and the mentorship that helped me get this off the ground back in 2014,” he told Nurse Alice. “And the reason I started this and the reason why I’m still here, is because I wanted to really build a future for healthcare professionals that made sense for people’s lives.”

Although Patterson admits that starting a business has not been easy— “there are definitely some gray hairs on my head that weren’t there before,” he laughed—he credits Sophia, along with his COO, for starting a strong product, along with Derek, the CTO and tech co-founder, and his own personal “why” for keeping the business going. His “why” is what drove him to start the business and he shared that it’s what keeps him going as well.

“My why is that there’s a better future here for healthcare professionals,” he explained. “There is a flexible solution. We don’t all have to work for healthcare systems…we don’t have to necessarily deal with things that aren’t making us happy at work. Maybe there’s a different path.”

He pointed to the fact that over 500,000 nurses have recently left the industry and how the landscape of nursing is ripe for a change like the one hips app will provide. “I’m psyched right now for where we’re at because I think there’s been a huge paradigm shift in the field and nurses are now more aware of what their worth and their value and they’re starting to learn how, use that to the profession’s benefit and we really want to be a part of that.”

CareRev is available on both the App Store and Google Play. You can also visit CareRev to learn more and apply for free. 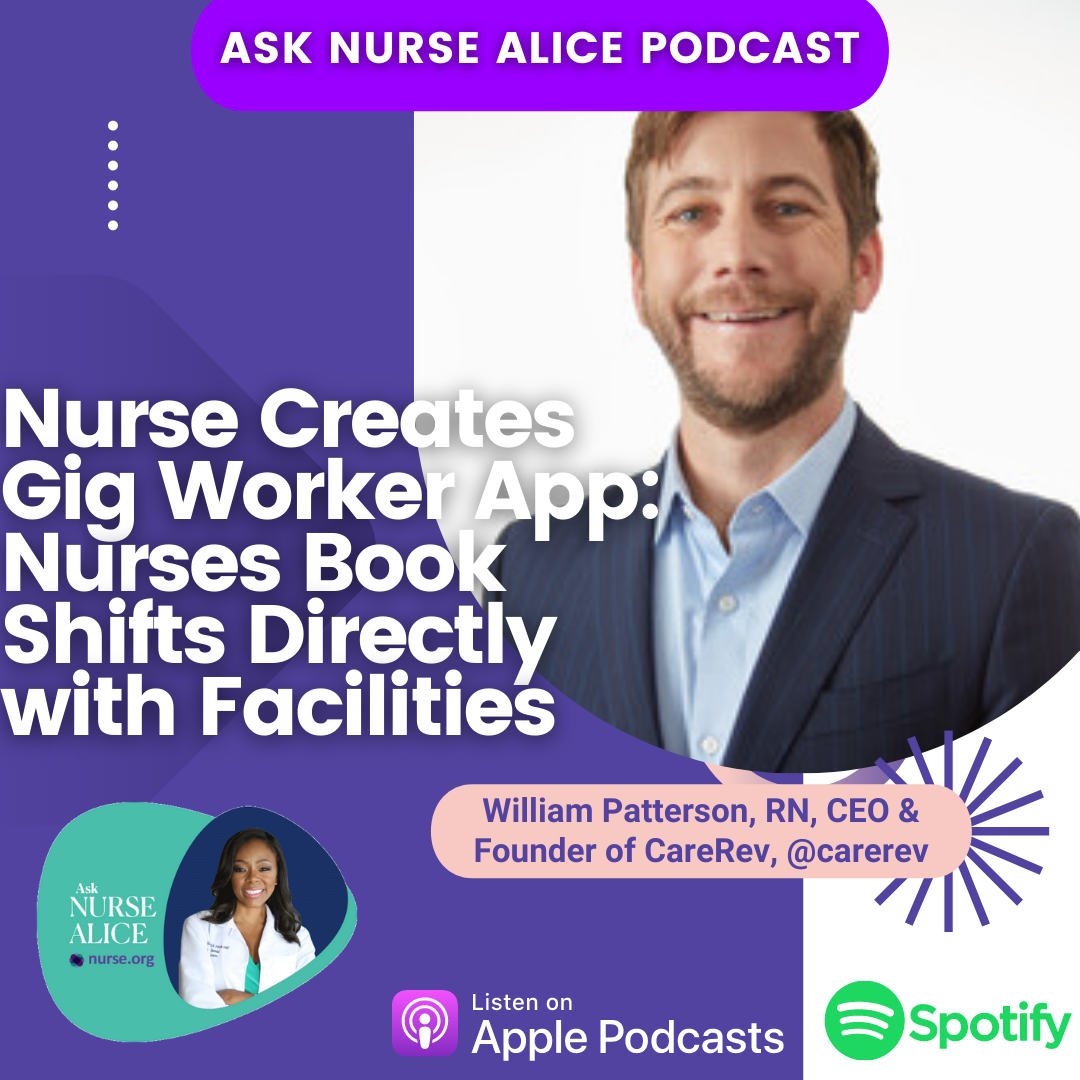