Japan Airlines initially only canceled its flights from Tokyo Haneda to Moscow on 3-4-Mar-2022, with the rest of its European routes unaffected. But it warned that flights could be canceled at short notice due to the evolving situation.

That is exactly what happened on 3-Mar-2022, when the airline dramatically increased its European suspensions.

Japan Airlines (JAL) canceled flights between Tokyo and London, Moscow, Paris, Helsinki and Frankfurt that were scheduled for 3-March-2022. Some were due to be cargo-only flights on one or both legs.

For 4-Mar-2022 the airline also canceled the Moscow, Paris, Helsinki and Frankfurt routes. One London return flight was cancelled, but another between Tokyo and London will still be operated with a different route and flight times.

Instead of flying west over Russia, the direct London flight will be routed north-eastwards to pass over Alaska. This means the flight time will be nearly three hours longer outbound, and 4 hours 30 minutes longer on the return.

JAL said crew duty time limitations meant it could not take a similar alternate approach for its other European routes.

The airline has yet to announce a decision on its European flights for 5-Mar-2022 and beyond.

The chart below shows that Western Europe accounted for 13.1% of JAL’s international seat capacity for the week of 28-Feb-2022, before the cancellations were announced. Measured in ASKs it accounted for nearly 18%.

This represents its third largest regional market by capacity. 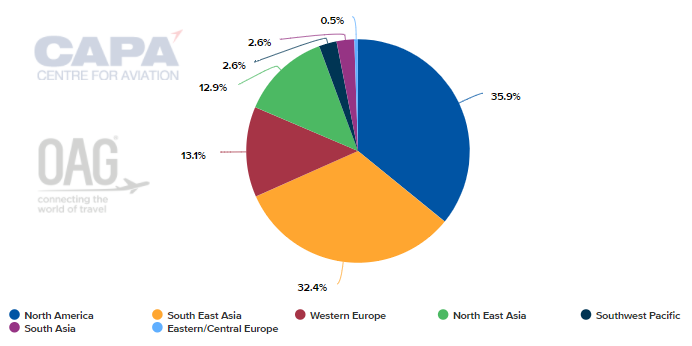 JAL had already made a notable codeshare adjustment before most of the flight cancellations were announced. It has suspended codeshare with its partners British Airways and Finnair on JAL’s European flights between 28-Feb-2022 and 26-Mar-2022.

This step is due to Russian moves to restrict the passage of European airlines in Russian airspace, and JAL said it aims to “avoid suspension of our operation by the Russian authorities and to maintain reliable flights.”

All Nippon Airways is taking similar measures, temporarily suspending almost all of its European flights that would usually fly over Russia.

The airline canceled flights on 3rd to 5th Mar-2022 on routes between Tokyo and London, Paris and Frankfurt, although some of the routes were not due to operate on all three days.

ANA will still operate a Tokyo-Brussels flight on 4-Mar-2022 that will return as an all-cargo flight, and a return flight on the same route on 5-Mar-2022. The airline said the Brussels flights will be rerouted over central Asia.

SIA has stopped its Moscow services but other routes are unaffected

Singapore Airlines suspended all return services between Singapore and Moscow from 28-Feb-2022, for what it refers to as “operational reasons.”

There are no changes to SIA’s other European flights. The airline does not have any routes that traverse Ukraine or fly near the Russia-Ukraine border region, and after the suspension of the Moscow flights it has no routes in Russian airspace.

Qantas has already routed its Darwin-London service away from Russia

Qantas has changed the routing of its flights between Darwin, Australia, and London since 27-Feb-2022. The airline is using one of its alternative flight paths that does not overfly Russia “given the current circumstances and complexities”.

This flight previously operated over the northern part of Russia, and is instead using a route through the Middle East and Southern Europe. This increases flying time about an hour.

Korean Air’s Moscow flights are operating as normal for now. The airline does not have any flights that are routed over the current restricted airspace in Ukraine and part of Russia.

However, Korean notes that if the entire Russian airspace was to be closed, most of its European flights would be affected.

The airline is developing contingency plans for flight operations in case the conflict causes any schedule disruptions.

Malaysia Airlines said its flights from Kuala Lumpur to London remain as scheduled. The airline said that it “continues to avoid the airspace over Ukraine, Belarus and Russia for all its flights to/from European destinations.”

Of course, Malaysia Airlines has a tragic history with Ukraine, after MH17 was shot down over that country in 2014.

The effects of the Ukraine conflict are already causing significant schedule and routing problems, for the Japanese airlines in particular.

Other Asia-Pacific airlines have been less affected so far, although they could be if decisions are made not to use Russia’s airspace. Airlines in Southeast Asia tend to have a greater scope for routing alternatives than those in Northeast Asia.

In addition to these operational hurdles, larger risks are also present for Asian airlines. The fact that some of their European partners have suspended Asia routes will be a blow, and if the conflict continues then demand for flights into and out of Europe could be significantly affected. Prolonged warfare would also be a drag on the global economy and would erode travel sentiment.

Even if the physical conflict moderates, it is highly likely that commercial sanctions and retaliations will continue for some time, jeopardising the use of Ukrainian and Russian overflights. This will cause major readjustments to flying schedules as markets open up.