“Michelangelo’s Sistine Chapel,” now at the Armory Art Center in West Palm Beach, offers visitors an up-close look at the frescoes from the Vatican City chapel, including “The Creation of Adam.”

Nobody witnessed white smoke come out of the Armory Art Center on a recent hot afternoon, but the crowd waiting outside cheered anyway. South Florida has a Sistine Chapel of its own.

Three feet separate us from the agitated hands of God, who authoritatively conducts an impossible mission in the “Separation of Land from Sea,” one of 34 frescoes featured in a new exhibition that is shaping up to be the next best thing to Vatican City — better, even, in terms of that unrivaled degree of separation.

“Who would have thought we’d have a slice of the Vatican here?” said West Palm Beach Mayor Keith James during the ribbon-cutting ceremony of “Michelangelo’s Sistine Chapel.”

Never mind that special printers and high-resolution photos conceived the replicas on view. If we won’t go to the masterpiece, the masterpiece must come to us, and so it has, in striking detail. On view through April 24, this traveling exhibit serves up the Michelangelo Buonarroti’s frescoes in life size and with unprecedented proximity. In doing so, it solved three problems plaguing the Rome experience: accessibility to the works, the multitude of tourists and the lack of mementos (aka photos). 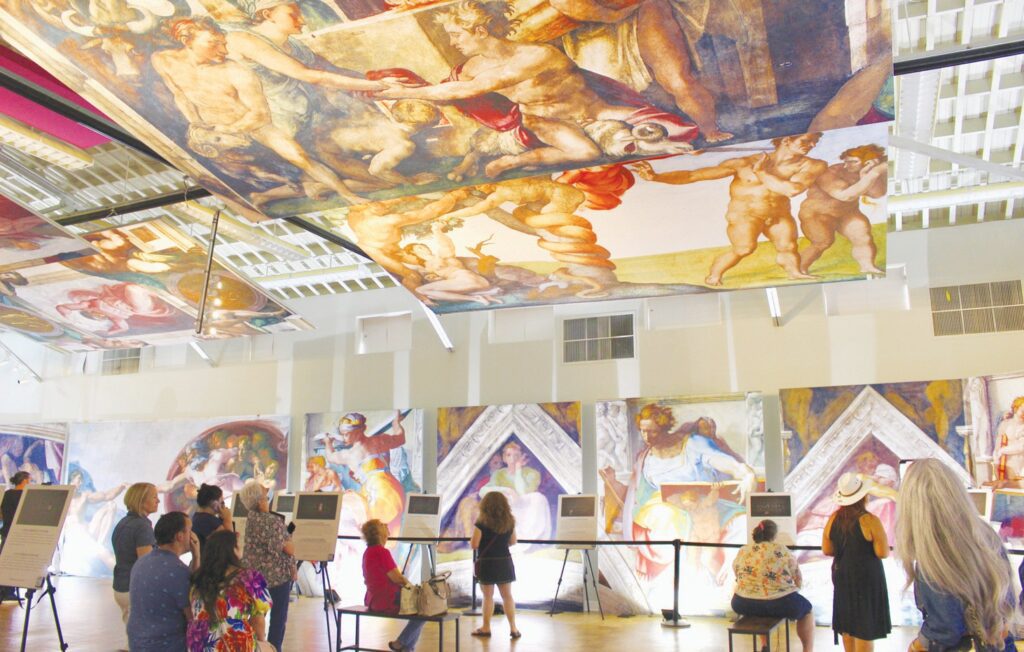 “Original Sin and Banishment from the Garden of Eden” shows Adam and Eve before and after they succumbed to temptation. GRETEL SARMIENTO / FLORIDA WEEKLY

Seven Prophets, five Sibyls and nine central stories from Genesis dominate the experience and meet us at eye level or suspended from the ceiling.

The muscular physique of Adam and Eve in “Original Sin and Banishment from the Garden of Eden” stand out despite it being well known that Michelangelo excelled at capturing the body anatomy. Their broad shoulders, ribs and curves are unnecessarily emphasized. The reinforcement of ripples on the skin is not the only element underscored by this proximity. There’s also the disobedience perpetrated by the former virtuous couple, forced out of the Garden of Eden in agony and shame. The tree of good and evil divides the panel in two, as a before-and-after shot. The half-human snake curling around it extends the infamous fruit like a benign gesture to Eve, whose reply severely contradicts God’s explicit orders. The openness and freedom enjoyed on the left side of the panel is automatically rescinded and we next find the evicted Adam and Eve concealing their faces. They have aged considerably.

Meanwhile, the highly recognized “Creation of Adam” anchors our attention on the precise moment the Creator breathes life into Adam via that magical touch of the fingers. A cloud of angels carries a bearded God dressed in pearly pink forward toward an athletic male nude. Adam’s youth and innocence don’t match the likeness of God, but who are we to contradict the scriptures?

Equally reproduced here in its near original size with special attention to the authentic hues and intricacies is “The Libyan Sibyl.” The unrealistic contorted pose of the female protagonist is more evident than ever as she is directly in front of us. We were willing to give Michelangelo the benefit of the doubt from afar, but it’s impossible to ignore the flawed design here. Her grace more than makes up for it, however, as she lifts or releases a book behind her while twisting her buffed body with the casual simplicity of a ballerina — an illusion called sprezzatura. She does all of this supported by her toes.

The Sistine Chapel owes its name to Pope Sixtus IV, who had the old Cappella Magna restored between 1477 and 1480. A team of painters, including Sandro Botticelli, was tasked with the initial effort, which saw the ceiling painted a sky blue with stars. It was not until 1508, when Pope Julius II approached the Italian master, that the frescoes collectively known as the Sistine Ceiling got underway. The work, portraying hundreds of biblical figures, was finished in 1512.

Martin Biallas, CEO of Los Angeles based SEE Global Entertainment (SEE), got the idea a decade ago after waiting in line two hours to see it and leaving with no pictures of the rushed experience.

Sylvia Noland, business development manager at SEE, recalls a similar memory from her visit to the Sistine Chapel with her daughter years ago.

“You leave wanting to know more,” she said via email.

It took five years to launch the show. SEE licensed the photos from Bridgeman Images and used a printing technique that lent the fabric a fresco effect. It might come as a surprise to find that the columns and structures framing the historical characters are, in fact, a product of the legendary sculptor’s imagination. And there’s another exposé courtesy of the closeups on display.

“The Last Judgment” fresco, which emerges at the end of the exhibition, bares a cameo appearance by Michelangelo as the flayed skin held by a corpulent St. Bartholomew. The saint, who became a martyr after being skinned alive, sits on a white cloud below Christ’s left foot while holding his own flesh. The painting, commissioned for the altar wall about two decades after the ceiling was finished, caused great consternation because of the abundance of nudity in it. Some of the figures eventually received underpants.

“He did an Alfred Hitchcock, where he placed himself into his work,” Ms. noland said.

The longer we stay with it, the more sinister details the painting unpacks, such as a grotesque figure sporting donkey ears and a snake seized up on his private parts. It is said to represent an ardent critic of Michelangelo’s risqué works. Look for it in the lower right corner of the panel.

The show appears to be the latest in the augmented-reality breed of exhibits showcasing technology-assisted reproductions rather than original works of art. Vincent Van Gogh, Gustav Klimt and Claude Monet have all received the immersive treatment. The Dalí Museum even resurrected the famous Catalan artist with the aid of Deepfake and computer algorithms.

Unlike those offerings, “Michelangelo’s Sistine Chapel” is not an immersive exhibit with holograms and futuristic helmets. In that regard, it stays truer to its birthplace atmosphere and allows for a quieter, less flashy interaction. Every so often the spell is broken when we catch a glimpse of the venue’s fixtures, but a selection of classical music playing in the background sucks us right back into the viewing experience. And that’s as deep as it goes.