Bonza, an airline without planes! Takeoff delayed for budget carrier offering $50 flights because no aircraft have arrived

A new low-cost airline has delayed its Australian takeoff as it awaits the delivery and approval of its first fleet of controversial planes.

Bonza planned to start flying in June, but pushed the date back to September as it awaits the arrival of three new Boeing 737 Max 8s.

The jets will be based on the Sunshine Coast and Melbourne, and will help service the company’s 27-route catalogue.

Bonza had planned on joining Aussie skies in June, but that date has now been pushed back to September as it awaits the arrival of three new Boeing 737 Max 8s

Bonza chief operations officer Carly Povey confirmed the delay on the airline’s website on Wednesday in the ‘interests of transparency’.

‘What we’re sharing right now is if people have essential travel plans for July and August, we recommend they book (with other airlines),’ she said.

‘We’re hopeful that in the coming weeks we’ll have a further update about when we can go on sale, and our first flights.’

The company, which is backed by US investment firm 777 Partners, hoped to recruit its flight staff in time for their entry into the Australian market, which it expects to be tied up before July.

Fares are expected to start from $50, with normal food and gift services to be available onboard flights.

The Civil Aviation safety Authority is working through the process of approving Bonza’s certificate application, which includes the controversial 737 Max 8s.

The planes were suspended from markets worldwide after two fatal crashes where the aircraft’s flight-control system automatically pushed down the noses of the jets.

There were two fatal crashes in six months between October 2018 and March 2019 that resulted in 346 deaths.

They have since been re-approved, with Virgin Australia among the first companies to order the jets. 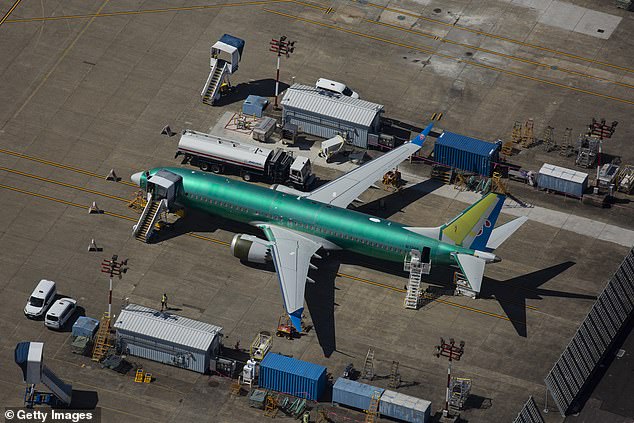 The Civil Aviation safety Authority are currently working through the process of approving Bonza’s certificate application, which includes the controversial 737 Max 8s

Ms Povey said the Fly Bonza app was already available, which will be the only way to book with the company and also offered a range of services both at the airport and onboard.

‘There’s a number of reasons behind that including our ability to better communicate with customers when they’re at the airport and on board,’ she said.

‘(The app) enables a strong sustainability focus from day one and it allows us to provide people an unrivaled customer experience in terms of food on demand on board.’

Customers will use a ‘digital support centre’ rather than waiting to speak to staff at an airport or going through a call centre.

‘We can give speedier service, we can give more direct answers quickly, so for us it will be about improving wait times,’ Ms Povey said.

‘Wherever possible we want customers to be able to self-serve. Nobody wants to be on the phone for hours and part of the thinking behind the app strategy is that we find a way to improve that response time.’